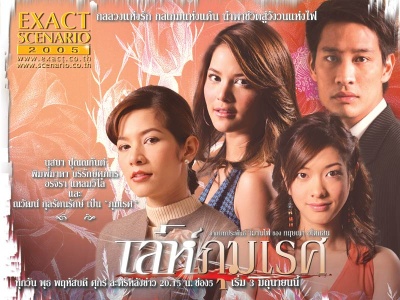 Pong acted as Pummared like the title of this lakorn. The story was about Pummared whom seeking revenge of his family enemy daugthers his dad's old business partner. Pummared's father had a partner in hotel business but they broke off with bad dispute and due to Pummared's father bad management his business collapsed so he tried to borrow money from his ex-business partner but he didn't want to lend him money instead took over the hotel and made Pummared's father became paralysed on both legs. Pummared came to Bangkok when his dad's ex-business partner was dead and came to his funeral pretending that his father was the family friend. Pummared's father ex-business partner had 3 daugthers. The 1st one was Ning, the head of the family good for handling business matter but lousy when it comes to relatioship and socialized with people. The 2nd one was Noy, the strong-will and easy going person who socialized a lot and good in handling matters. The youngest sister was Noi, naive and innocent never know about outside world,love, and lack of confidentlity because she just staying at home and the best she could so just cooking at home. Pummared seduced these 3 sisters, the eldest sister was easy to seduced since she was yearned to be loved, the youngest also easy to seduced because she didn't know what love is until she attracted with Pummared even though she knew that Pummared already with her eldest sister she's willing to be his mistress. Noy was difficult for Pummared to win over because she was smart and not easy to fall for a guy, Pummared was being challanged to win her heart and he fell in love with her because of her behaviour compared to her 2 sisters.

When Noy found ot that Pummared was her eldest sis's boyfriend she was very angry and had an argument with her eldest sister because she told her that he was not a nice person but Ning refused to believe her blinded by her love to him. Noy left home insisted couldn't live in the same roof with Pummared. Noy knew from his father's ex-lawyer whom Ning fired because he warned her about Pummared that Pummared and his dad were not decent people that they had motive to get involved in her family business. The fact was Pummared tried to take control of the company for his father's sake but less he knew that his father was the bad guy who tricked his son to pursue his personal ambition and he liked to gamble. Pummared married Ning and soon after Ning gave him power of her company on their wedding day then he showed his true color and didn't want to sleep with her but left to Noy's place but she didn't accept him, later on he ran away from everything. Pummared also impregnate Noi (the youngest sis) who fell head over heal to him and still didn't realize her mistake loving wrong guy.

Ning realized her mistakes marrying a wrong guy and Noy reconciled with her. One day Ning knew that Noi was pregnant with Pummared, she's angry and jealous so when Pummared came to her house to talk over with Noi she wanted to shoot him but instead shoot Noi to dead, Ning went berserk hence Noy became all alone. Pummared realized his mistakes and his father misdeed and he wanted return everything to Noy however his father accidentally shoot him. He returned the shares to Noy and admitted that the only person that he truly loved just Noy he refused to go to the hospital and died in Noy's arms. Noy loved him and cried, she just couldn't accept because the way he mistreating his sisters.