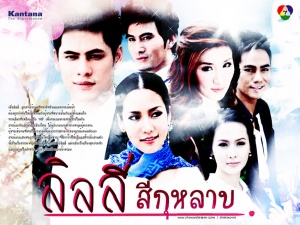 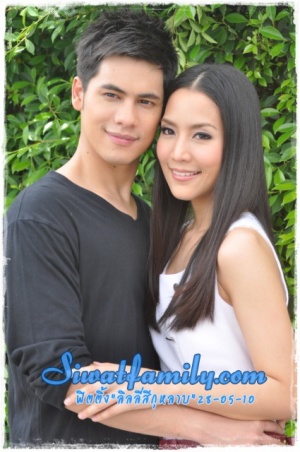 A Hong Kong billionaire who owns horse farms has a daughter named Lily who is a beautiful person and self-willed. Her father wanted her to marry his friend Peter's son. She didn't want to marry him so she fled to Thailand. Her father sent 2 people to Thailand to find her. She used her intelligence to make her way around her dad’s worker and that is how she met Cee.

Tune in to see what really happens between those two.

‘Lily See Kulap” is a romance action comedy about a young woman from Hong Kong who fled her country to Thailand to get out of a force marriage by her uber wealthy father. Her name is Lily. She hires Nop (Cee), a former police officer, as her bodyguard to help her fend off her father’s two bodyguards who were sent by her father to haul her back to Hong Kong to marry Peter, her betrothed.

More complete summary by Lyn's lakorn blog: Lily (Jakajan) is the only daughter of a very wealthy man in Hong Kong and she is a spoiled little brat. Her father wants her to marry Peter, the son of one of his closest friends. He wants to cure Lily of her selfishness and immaturity by marrying her off. Lily doesn’t love Peter so she flees to Thailand in search of her Thai friend and to find her true love. Her father sends out two bodyguard to bring her back to Hong Kong to marry Peter.

When fleeing from her father’s bodyguards, she bumps into Nop and hires him as her bodyguard. At first, by the way she is dressing, Nop thinks she is a prostitute trying to run away from her pimp. Though he has misgivings about Lily, he does accept her proposition. Nop is going through a life crisis, he is having problems at home with his father who married a younger woman. He just quit his job as a public servant because of boredom. Nop is a former police officer. In meeting Lily, Nop’s life turns upside down.