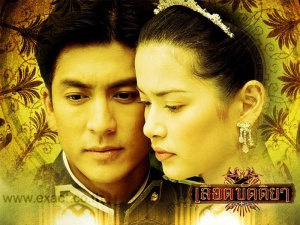 When the King of Yasortorn(a small country situated in Mid Asia) was assassinated, this resulted in his only daughter, Princess Darakumari (Piyada Akarasenee), being demoted from first to being third in line to the throne, not living the fancy life she ought to. But because of this, she was able to accidentally meet Anothai (Jesadaporn Pholdee), the son of a retired general. The two then became friends from when they were still children, their friendship slowly changing into a deep love for one another. However, Anothai only ever knew the Princess as "Dara", a common girl who lived in the palace. Growing up, because of his father's influence and his own dreams of serving and protecting the country, Anothai decided he wanted attend the royal military academy. In the end, Anothai becomes a brilliant officer who is promoted quickly. Then one day, Anothai finds out that the woman he loves is not the ordinary girl he met, but in fact a princess, third in line to the throne. This upsets Anothai greatly because he believes strongly that a commoner like him is not allowed fall in love with a royal. But because of the strong love he has for her, he swears that he will do whatever it takes to put her on the throne as the Queen of Yasotorn, even if it means sacrificing his own life.