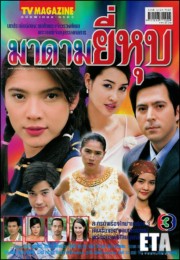 I'm using "Yuranan's" because that it is his character in this lakorn and he's not acted as himself.

The story is pretty funny even though I don't speak Thailand and this lakorn that I watched is without english subtitle, so imagine how good this drama could be until could make me understand the story without subtitle!

Ning acted as Yeehoob a village girl but very tomboy and very bad in sense of style (surely because she was from small village). Yuranan (I forget his character name) was a guy from a wealthy and respectable family, his and Yeehoob's father made a promise to married their kids when they're grown up. Yuranan's was very shock and his mom and his sister absolutely refuse that riduculous ide, but he gave in to his father and went to the village to see Yeehoob. Yeehob fall in love at the 1st sight with Yuranan's hence she went to the city to stayed in his house. Yuranan's brother was sissy and hated by his mom and siter and befriended and took side with yeehoob. Yeehoob tried to win yuranan's heart so she tried hard to learn courtsey and changed her look and her dress. However Yuranan's had a girl friend (not exactly girl friend just that she's very clingy to him and he seemed like her too), the girl friend tried in every way to ruin their relationship. Yuranan's insulted yeehoob made her wanted to look classy and beautiful in front of him. Yuranan's saw her effort and gradually cared for her.

Yeehob became more beautiful by changing her hair and dress style made Yuranan and his friend both crazy about her, however she was not easy falling into him even though she loved him she's playing hard to get (in funny ways), and Yuranan's character became jealous with his friend and other guys who wooed her. Shortly after they married in her home town but his mom and his sister didn't know when they knew that Yuranan's going to marry yeehoob they went to the village with the girl friend and the girl friend's mom also tagged along (she was a noisy one).

ON their 1st night, Yeehoob didn't want to having sex with him so he okay with that but kept teasing her frightened her to sleep together with him, when they back to the city they still slept in separate bed but in a same room, in the end they consummate their marriage. The girl friend still being clingy with Yuranan but yeehoob try to be patient with her and the girl friend pretended to be niced to her while she was actually planning to kidnap her.Yeehoob was kidnapped but she could free herself (of course because she's very strong), but she had misundertanding with Yuranan's (i think she thought that it's Yuranan's who tried to kidnap her), hence she wanted to divorce him but he was proven not guilty and pursuing her back which was difficult because she was disappeared into thin air and nowhere to be found. Yuranan's didn't want to eat and missing his wive until the father in law gave in and showed him the place she's hiding. At the end the girl friend was jailed for the kidnap issue and yuranan's mother liked yeehoob becuase of her good daugther in law rule while yuranan's sister ended up with his friend who liked yeehoob at the 1st place.

Yeehoob accepted him back and they were together again.