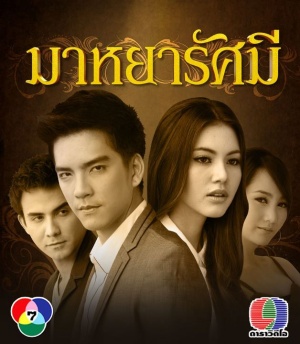 Ram,15-year-old girl ran away from father's home, from a frightened threat to lock her up in the storage room again as usual.her cruel stepmother,Chandra mad ram's life horrible and sadness when ram ran out nobly cared so they went back to bed. After Rasri, Ram's mother passed away, Ram confronted the dark side of life as clouds obscured the waning moon. The poor girl ran out into the raining streets where Khun Chai Thitirat was driving past the street she ran from and fainted, so Khun Chai took her to his sister's house where her husband P'Mau OR in english P'Dr they checked her then she had a high fever. so Khun Chai took her to his room where he stays over and let's her rest in there for now and he would stay and watch her and he fell asleep on the chair. Ram woke up with sudden shock and it was dark in the room and didn't know that Khun Chai was the taking care of her for now.the next morning, she explained everything about her life and what happened and begged to stay after they asked her if she wants to go home. So they let her but Khun chai had to leave to america and continue with his studies for college. Ram found out o she knitted him a scarf to america and while he was getting her school clothes she had to leave when rams dad and chantar came and took her home. Khun chai was stunned when he came back from the shopping. he had left to america when ram was at home at night with a huge misunderstanding.

With compassion and a kind, he helped and provided shelter for her willingly. Ram's careless father, Mern, had been not willed to lead a daughter to Maneekul until Mern's sister, Mali, asked. Then the young girl was necessary to separate with Mr.Kamales and returned to face with Chandra and her daughter, Pen, but Ram was a bit lucky that Pen was completely different to Chandra, her own mother. In the Maneekul, there was an old maid, Pim, who looked after Ram and also Mali's son named Manthep or Tom who was fond of the poor girl. Chandra's niece actual daughter Chutima, jealous and lack of love girl added. She often bullied and commanded Ram to do everything as if she was a maidservant.

5 years had passed, Duenram the had grown to become a beautiful lady with good manners , Duenram Maneekul at the age 20 met Khun Chai Thitirat again. He came on as Pen's fiance. By promise of M.C.Theeradhamrong Kamales, Thitirat's father, whom Mern had rescued that if Mern had a daughter he would ask to marry his son. Mr.Maneekul and his wife agreed Pen was more appropriate to be a part of “Silalai Manor” as Khun Chai's wife than Duenram or "Mayarassame" the name M.C.Theeradhamrong particularly gave her before he was gone.

Who's suitable for the Kamales Na Ayudhya(The new surname of the lady who marries with Mom Rajawongse, M.R.). Love and goodness between Ram and Khun Chai Thitirat could ensure whether everything is resolved and the truth comes out with a twist. when chatra goes crazy and tries to kill ram or mayarasamee and pulls a knife out at their weeding and p tom comes out with a gun an shot it up at his and choo's wedding and the rest's wedding too and chatra lets go off ram and runs out and mistakens her brother as her ex husband and stabs him and gets arrested. the next day everybody was confused about chantra and ram or mayarasamee and Khun Chalive happily ever after together. i edited this but this credit is for who ever wrote this be fore me.