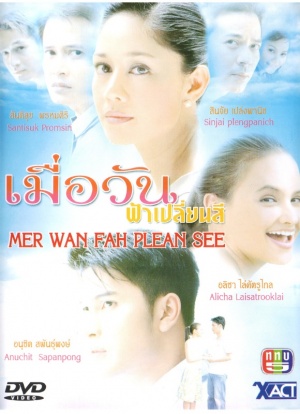 Chan (Sinjai Plengpanich) a maiden of 17 is supporting her family of four consisting of her mother, Nang Chaem( Narumon Peampongsanta) an invalid, her father Mr. Lueay (Komgrit Yuttiyong) an alcoholic and a gambler, and her two younger brothers. She is persuaded to sell roasted chickens at the railroad station by her friend, Pon (Naruthai Pichitra).

Ying (Santsuk Phomsiri), a lover of Chan, studies for an advanced degree while working at the ice factory. He promises to marry Chan when he graduated and find himself a better job. Chan is hit by a motorcycles driven by Tee (Anuwat Nivatwong) who owns a transportation company. He falls in love with Chan and asks Maen (Pimpan Buranapim) to be a matchmaker for him through Mr. Lueay who readily agrees in exchange of a large sum of money for gambling. Chan has to get married with a broken heart.

A day before the wedding, Chan goes to see Ying and offers him her virginity. Ying declines for the sake of true love. Before they depart, Ying slashes himself and writes a letter in his blood blessing Chan and confirms her of his steadfast love.

Chan marries Tee and performs her duty as a good wife. She is badly treated by his mother, Jou (Chomechai Chatvilai) and his younger sister, Lin (Warapun Ngui tragool). Chan’s firstborn is a daughter, Hong, to the disappointment of everyone who preferred a son. The transportation business worsens and Chan and Hong are to blame. Next year, Chan gives birth to a son, Kla. The business picks up and Kla becomes endeared to every one.

Ying goes to live with a general whose daughter, Down (Khwanrudee Nivatwong), takes a liking of him. He works and studies hard. Ying is diligent and keeps writing Chan letters of endearment which helps her to go on fighting. Ying is graduated and with the help of the general, he is appointed as an assistant district officer at his birthplace. Eventually he is married to Down.

Chan gives birth to a second son whose name, Mai, is given by Ying who happens to meet Chan. Chan’s life worsens when Pon gets married to Leng (Prab Yuttapichai), Pon is a crook and greedily persuades Leng to steal from the common fund. Tee’s business therefore goes down. Ying gets settle in his birthplace together with Down. She is pregnant with her first child and becomes irritate of Ying’s assistance to Chan.

Tee becomes a philanderer and forsakes Chan. In her poverty, she gives birth to a twin, a daughter named Muey and a son named Montri. Tee is furious to learn that Chan and Ying secretly continue their relationship and assaults her. Chan flees from Tee, taking along her own children with the exception of Montri who is too young. Upon learning of their plight, Ying seeks for her to much of the irritation of Down.

Chan works hard to earn enough to feed her four children. Finally she deigns to become a servant of a millionaire, Kong (Claude Atthaseri) and his wife Maen (Umpa Phusit). Eventually Chan becomes a concubine to Kong in exchange for a better future for her children.

Hong (Rasri Watcharapolmek) becomes a teenager and is forced to become a concubine to Kong. Luckily she is saved by Kla (Phuwarit Phumphuang) and Mai (Anuchyd Saphanphong). The millionaire Kong is furious and chases them out. Chan and her children wander aimlessly. Luckily she comes across Mrs.Chit (Paradai Suwannarat), a rich owner of a fruit orchard who is assaulted by some robbers and rescued by Kla and Mai. The whole family is then adopted by Mrs. Chit. Chan works hard and becomes much more comfortable. Eventually she builds up her fortune and owns a cannery which is under the supervision of Hong, her daughter. Kla is a cadet who always clashes and fights with his younger brother, Mai. Their younger sister, Muey (Tanikan Sirinupong) seems destined to be a model. Mrs. Chit takes much liking of Chan and really wants her to marry her own son Pong (Noppasit Thiengtham). But Pong and Chan are just good friends.

Mai and friends are involved in a gang fight. In his flight, Mai meets Ning (Alicia Laisuthruklai) on a public bus. Ning, an adventurous beauty, helps Mai by hiding his gun from the police. It is love at first sight ; Mai does not realize that Ning is in fact the only daughter of Ying and Down. Hong meets with Noppadol (Oliver Biver) a son of Mom Pannarai a hotelier who act as if they are rich. Noppadol gets involved with Hong because of her fortune. Without realizing his true intention, Hong falls in love and decides to marry him.

Chan’s cannery is in turmoil because of the workers’ protest. The district officer comes in to arbitrate and that is the chance for Chan to meet Ying. Much to the consternation of Down, their relationship is rekindled. Down keeps up her harassment of Chan. Ying declares his independence from Down. Although Ying and Chan still love each other, their love comes to no avail because of a protest from Mai. Down persuaded her father to see to it that Ying is ordered to transfer to some desolate place.

The love affair of Mai and Ning is tampered when it is known to Down who ordered Ning to stop seeing Mai. Ken (Pattanapon Mintakin) a son of Down’s friend is introduced to Ning. With down’s support, Ken is infatuated with Ning.

The youth gang of Mai and Win (Lerwith Sangsith) is involved in an altercation with another gang led by Kid ( Pakachan Voonsri). Kid is killed by a stab and Mai is apprehended because of his possession of a stabbing knife. Chan spends all of her cash savings to salvage Mai. The family fund runs dry when Hong spends a lot of money in Noppadol’s hotel business.

Mai is sent to the penitentiary where he gets to know Krue Thongtos , the boxing coach. Mai begins his boxing career in the penitentiary. When he leaves the penitentiary, he continues and becomes a professional boxer, earning prize money to help his mother.

Kla falls in love with Praew (Pharujee Khemsawat), a daughter of one of the instructors in the Cadets School. The marriage is arranged when Praew is pregnant. Chan spends her last saving to sponsor the wedding. Out of their vengefulness, Pon and Down starts a cannery to compete with Chan. The cannery of Chan is burned down by arson and she is impoverished. She and her family go to live with Kla in Praew’s house. Muey starts her acting career and becomes more and more popular. Her first album is issued. She becomes infatuated with Montri (Pongpant Phetbuntoon) a Chinese looking singer. Learning that they were born on the same date seem to strengthen their infatuation. Praew’s father decides to enter politics and launches a dinner party at home to entertain the new party secretary. Chan who comes to helps launching the party meets with Ying who is overjoyed to see her again. Ying reconfirm his love to Chan who equivocates because of her concerns for the family. An arsonist Sue is apprehended and implicates Pon who in turn implicates Down. They all meet again in court. Pon is sentenced to be imprisoned while Down is salvaged. Because of this incident, Mai is so infuriated of Ning that he no longer speak to her. Ying, her father, tries his best to calm her down. One day Mai comes across Chan polishing shoes for Praew. Mai complains strongly to Praew. Kla and Mai therefore clashed again. Kla thoughtlessly refers to the fact that Mai used to be imprisoned and that Chan used to be a concubine before. Mai hits Kla and declares severance from the family. Chan and her family decide to live with Ying.

The love affair of Muey and Montri is intensified. One day Chan happens to come across Montri and is suspicious of Montri’s background. When the fact of the matter is revealed, she orders an end to the affairs but is met with consternation from Muey who is infuriated by the suspension of her love affairs.

Ken promises to ask Ning for marriage if the boxer in his team won over the opponent. Ning is unhappy since she is not in love with Ken. Noppadol and Ken watch the match between Rit, a teammate of Ken, and Mai, who newly turns a boxer. Ken puts a lot of money behind Rit only to lose when Mai pulverizes Rit.

Noppadol is angry with Mai and therefore hurts Hong and chases her away from his house. Mai and Ning reconcile and agree to let each other free to find better lovers.

Ken and Noppadol scheme to trap Mai and Ning. Mai fights valiantly to protect Ning from being raped by Ken. Ning is hit accidentally on the head and passes out. Mai is implicated for murder. Kla is being assigned to arrest Mai and investigate this case.

The persecution of these two siblings causes great damage to Chan’s life when she is hit by a stray shot of Kla, aiming at Mai. Her life hangs between life and death while her children continues to suffer. Kla is guilty of having shot his own mother. Hong is beside herself because her husband forsakes her. The twin, Muey and Montri, become lovers without realizing that they are in fact siblings. Mai is implicated as a murderer.

The story of Chan’s family is waiting for the sky to change its color, from dark blue to bright blue. They know not when…