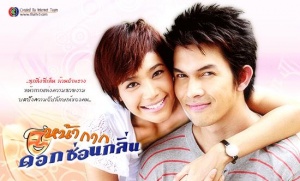 Saenpum quickly return’s from oversea’s once he finds that San his father has passed away from a severe heart disease after going on vacation to the beach with his young wife whom he just married. Once he returned to Thailand and landed at the airport Sagat the best friend of San and Maleewan San’s wife happily greeted him. Maleewan had taken care of all prior funeral arrangements for him and preserved the body for Saenpum’s return in order to have it cremated because in the next 100 days once the body is cremated, San’s will, will be opened. Maleewan tells Saenpum that San had left everything to him. This causes Saenpum to be very curious because his father didn’t leave anything for his beautiful and kind wife. As for work at the company; Sagat is helping him out with it and taking great care of it.

Once Saenpum returns he is carefree and has nothing to worry about so he spends his time going out and is attracted to Romnee or Raymee the niece of Sagat which Maleewan has introduced to him. Maleewan had hopes that Raymee would trick him into going to the Pataya to race. Saenpum see’s that someone has had a crashed and quickly goes to help him to safety, but because Romnee is in a rush to continue on with their venture Saenpum is then unable to accept a thank you from Baitoey the daughter of the man that Saenpum had rescued. Once they reached the Pataya Saenpum meets Nicky a very known racer. He spends the time with Romnee to the point where the two has an intimate relationship

Once Aunty Kai Saeng finds that her nephew is ignorant and spends his days going out and doesn’t worry about work she tells him that Maleewan had devised a plan to kill San in hopes of gaining his fortune. Saenpum doesn’t believe her because from the beginning of time his aunt often accused others of michievious behaviours. Kai Saeng asks Saenpum to go and help with the construction of her chilli sauce company. Saenpum sends his friend Chanapon instead. Saenpum then goes out with Romnee and they go racing but with bad luck Saenpum get’s into a car crash that heavily impacts his skull; the only way to save him is brain surgery which Maleewan refuses in hopes that he will die, but Kai Saeng tricks her into allowing the surgery with the condition that the doctor must be one appointed by Kai Saeng.

Dr. Wiwek who does the surgery on Saenpum is able to save him, but Saenpum awakes with abnormalties. He is able to hear what others think. At first he doesn’t understand and goes ballistic so everyone thinks that he has mental issues. Saenpum quickly goes to discuss this with Dr. Wiwek who tells him that he has a special six sense. Saenpum doesn’t believe it at first, but he starts to hear what the people around him were thinking louder and louder. He then comes to find that Sagat and Maleewan weren’t as kind as he believed them to be because they often insulted him. Saenpum also realizes that Sagat and Maleewan were having an affair.

Once Maleewan had found that San left everything to Saenpum this causes her to join with Sagat and devise a plan to get rid of Saenpum. Since the car crash plan backfired they attempt to make it appear as Saenpum is crazy by inviting Dr. Jomkwan who is a psychiatrist to diagnose him, to make it appear as though he was mentally instable, but Dr. Jom Kwan doesn’t give the diagnose’s that he is mentally instable.

Once every plan has failed Maleewan asks Nicky who is actually her brother to send someone to kill Saenpum. Nicky sends an assassin who is then employed as Saenpum’s driver. While going to discuss matters with Dr. Wiwek Saenpum hears the assassin’s murder plot and knows that Maleewan is involved. He interrogates the assassin to the point where the assassin has no choice but to call Nicky and tell him that Saenpum knows of everything. Dr. Wiwek advises Saenpum to call the police, but tells him to keep the fact that he could hear others thought secret.

Saenpum goes to ask for help from Sagat, but he overhears Sagat’s plan to murder him. He also finds out that Romnee is just an escort that was sent in to spy on him and trick him into racing so he could have an accident. He run’s away from home and goes to stay with Chanapon who ends up tricking him for his money. After he has no choice he goes to Keisomsak so that he could pawn his stuff, but not only did he not get the money. Somsak calls Maleewan to come and get up. With no choice Saenpum goes to Kai Saeng and tells her everything. Saenpum was anticipating that she would insult his ignorance, but on the contrary. The voice in her head was filled with sympathy and care for him.

Kai Saeng quickly takes Saenpum to Siam the family attorney in order to take care of the will. They then find that Sagat also came for the will. Siam quickly gives the will to Saenpum because he didn’t want to have anything to do with it anymore. Saenpum asks Kai Saeng to stay at the Chilli Sauce Company and she agree’s with the condition that he must work and he will get 150 baht a day as pay. He accepts because he knows how much his aunt loves and care for him. While working there he meets Bua Loy one of Kai Saeng’s close servant. Bai Toey and Bai Tan are two sisters who help Kai Saeng take care of the chilli sauce company. The two are children of Bun Term whom Saenpum once saved from a car accident. Bai Tan suffers from a mental disorder and doesn’t talk much. From the outside he appears to be mentally disabled, but inside he is a genius. Bai Toey is a very smart and intelligent young woman who helps Kai Saeng take care of the company. She will always speak what she thinks and is harmless against everyone. Maleewan and Sagat attempt to find Saenpum everywhere. When they are unable to find him they create a fake will and hands it into the court believing that by the time Saenpum returns everything would already belong to Maleewan.

Saenpum is forced to hideout in the chilli sauce company and disguises himself as just a regular employee. He keeps his identity a secret and the only people who knows who he is; is Bai Toey and Bai Tan who help him conceal his identity. Maleewan and Sagat often sends investigators to find Saenpum, but he is able to hear their thought and escapes every time with the help of Bai Toey.

Bai Toey goes to buy chili with Saenpum at the Loong Orm’s plantation. It severely rains causing the two to have to spend the night there. Once the two returns there is gossip that the two went and did something intimate. Kai Saeng advises Saenpum to marry Bai Toey. Although he likes Bai Toey he refuses because he doesn’t want to bring her down with him. When he went to go and apologize to her he overhears that Bai Toey does have feelings for him also. Assassin’s attempt to shoot Saenpum, but Bai Tan is able to save him and catch the culprit and send him off to jail. The police are unable to identify the mastermind behind it. When Saenpum takes Bai Toey home he accidentally falls asleep til morning. Damsao a very notorious gossiper comes to get something from Bai Toey’s house and finds Saenpum sleeping there and spreads it around causing Bai Toey to be very embarrassed. Saenpum then decides to propose to Bai Toey. Kai Saeng sends the two off to Loong Orm’s house to start a new life together and hide out from dangers after their marriage. Maleewan disguises herself and comes to find Saenpum at the chilli factory. She eventually finds out that he is at Loong Orm’s house.

As for Dr. Wiwek he is harrassed by Maleewan and Sagat who complains that his surgery on Saenpum was abnormal. Dr. Wiwek goes and invite Bai Tan who he once operated on to speak on his behalf, but Bai Tan invites him to stay at the Chilli Factory. While on Saenpum side he is worried about Kai Saeng and calls her. While on the phone with her he hears villans breaking into her house thus harming her. He quickly goes to save her. Once he gets there Dr. Wiwek tells him that Kai Saeng was kidnapped. Saenpum goes to rescue Kai Saeng alone, but he doesn’t know that Kai Saeng was not abducted.

Saenpum goes home to wait for Maleewan to return, but coincidentally Maleewan is stressed so she goes out to a bar without knowing that Dr. Wiwek and Dr. Jomkwan has asked the bar owner to film her there. Once she gets completely drunk she admits to everything and take a young man from the bar home. Maleewan is drunk to the point where she doesn’t realize that the young man she brought home was stealing things from the house. Saenpum returns and catches him. He calls the police and also calls reporters. Maleewan comes to her senses and accuse Saenpum of tresspassing, but Kai Saeng appears and explain everything to the police along with the video. Maleewan is then caught in her own lies and is arrested. Once arrested she dumps all the faults onto Sagat.

Saenpum recieves his fathers inheritance and goes to work for his father’s company which is in trouble. He uses the gift of hearing others thoughts to his advantage in helping the company back up. He is so busy with his work that he forgets about Bai Toey. Bai Toey is sad that he has no time for her so she tells him she wants to return home. Saenpum doesn’t object. Time passe’s by and he goes looking for Bai Toey, but is unable to find her so he asks Kai Saeng for her location. Kai Saeng pities him so she gives him the location to finding Bai Toey.

Saenpum finds Bai Toey and makes up with her. He also finds that she is pregnant with his child and is very excited. Saenpum returns and builds the business back up along with helping Saeng Kai’s chilli sauce company become successful. Bai Tan then goes to continue his studies in becoming a doctor in South Africa. Truthfully Bai Tan is not mentally disabled like many see her to be. She like Saenpum is able to hear other’s thoughts. As for Saenpum he will only hear other’s thoughts for another 2-3 years. After that he will no longer falter to the beautiful mask and sweet words of others anymore.