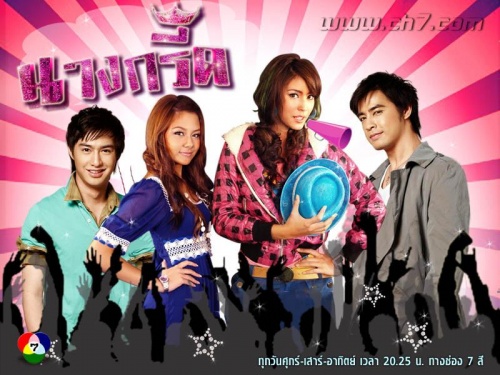 A romance comedy starring Jui Warattaya, ‘Oil’ Thana Suthikamol, ‘Sammie’ Pantitha Puwijaan, Tawin Yaowapalakul, and also Jamie Buher as nang’rai. Jui is Jirawatee (Jaem), a young woman from the slums who works as a professional screamer. Concert promoters pay her to scream at concerts and to scream like a crazy fangirl for pop idols.

Oil Thana is Punatorn, a man who studied aboard, has an MBA but wants to be a pop singer. His father most definitely disapproves because the guy can’t sing or dance. Still wanting to prove himself and to pursue his dream, he begs his father for time, 3 months to be exact. If he doesn’t succeed as a singer, he will come back to work for the family company. Punatorn has one younger brother, Tipreeti played by Tawin Yaowapalakul and a fiancé, Yosita played by Sammie Pantitha. Tipreeti secretly has a crush on Yosita but keeps it to himself out of respect for Punatorn.

Panatorn and Jirawatee’s lives begin to collide with each other when she rises from being a screamer to being a beauty pageant contestant and he begins his singing career.