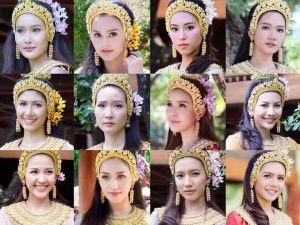 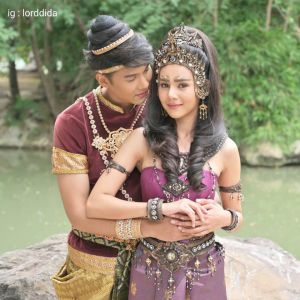 (SPOILERS ALERT!!! This is just according to previous verisons. Will change if anything different occurs in this version...) Classical story of Nang 12; the twelve Sisters. A merchant insults the gods and soon a flood strucks the land. He is struck with poverty and soon his wife gives birth to twelve lovely daughters. But 12 daughters and living in poverty is too much for the merchant to handle and there's barely enough for him or his wife to eat as each day passes. He asks his friend for a vision and his friend sees that the twelve daughters will be fine and have a wealthy life in the future; so the merchant decides to take his 12 daughters to be abandoned in the forest. First time, his wife got upset at him so they went back and was able to find them again, thanks to Pao (the youngest and smartest) remembering the way back. Second time however, the gods weren't on their side, and the dad takes them to be abandoned in the forest once more and the girls are soon lost. The parents went back to look for them but they can no longer be found. Soon the twelve sisters finds themselves in the garden of Giantress Santra Santamala. Her, having no child, took pity on the poor girls, and decides to take them in as her own. She spoiled them and looked after them like how a mother would. However, Maya (an older Giantress) who stayed with Santra doesn't like humans and thinks they will bring trouble and chaos upon Santamala and their kingdom of Yaks. Once, the girls grows up, she shows the ladies a cave full of bones and skeletons, scaring them away. The 12 sisters runs off and comes upon a Kingdom run by King Rothasit who is ill. They cured the king and he married all 12 of them, though the King only love Pao but she loves her sisters a lot so she allowed him to marry all of her sisters. Their happiness doesn't last long, as Nang Yak Santra has tracked them down and found them. She puts king Rothasit under a spell and throws them all in a cave. She then tells the king that she's ill and needs the eyes of the 12 to be cured. By the King's order, all the 12 sisters eyes were plucked out, except Pao. Only one of her eyes were plucked, beacause when they got to her, they got order from the King to stop. Santra gave all the eyes to be kept back in her kingdom by her adopted daughter Mayree.

All sisters were pregnant and gave birth to still born babies. Being blind, they can't venture out nor had food, so they all ate their own still born babies. Pao gave birth to a healthy boy and names him Rothasen, and kept it a secret from her sisters. Soon the boy grows up and ventures out to find food for his mother and aunts and they learned about Rothasen and took a liking to him. Rothasen ventures out one day and meets Santra and she too also took a liking to him but soon finds out who he really is. So she sends him back to her kingdom for Mayree to kill him, but along the way, Rothasen met a Pra Ruesee hermit, who changed the message from killing to taking care/marrying him. Rothasen arrives and meets Mayree but she isn't fond of him. He stays with her and they slowly fell in love and got married, but Rothasen knows he must get the eyes back to his mother and his aunts. One night, he makes Mayree gets drunk and he runs off with the eyes. Mayree wakes up and follows him, crying and begging him to go back, but he tells her she doesn't know what he must do. He separates the land and sea with dust of fire and as he flies away, Mayree collapses on the ground.

Rothasen brings the eyes back to his mother and aunt, right when Santra was confronting his mother and his aunts. Santra was surprised to why he was back so soon, and she thought he had killed Mayree. With that, she dies from a heart attack. Rothasen puts the eyes back to his aunt and mother, however he tells his mother he can't stay and must hurry back because Mayree is a Yak(giant) and can't come live with them. His mother is saddened and says if she knows that he won't be able to stay with her, she would rather be blind for the rest for her life. Rothasen tells her, if she wants him to stay and not go back to Mayree he also will do that, but he knows that Mayree won't be able to live without him and for her to decide.

Back at Santra's kingdom, Mayree waits lifelessly where Rothasen had left her. With her last breath, she tells the servants and Maya around her, saying that since she followed him this lifetime, in the next, he must be the one to follow her. With those words, she dies. Rothasen comes and discovers her lifeless body. With Mayree gone, his life is meaningless and soon he dies of a broken heart too. And their journey into the next life begins...in Pra Sutton Manora...