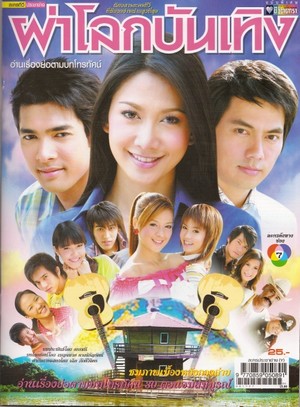 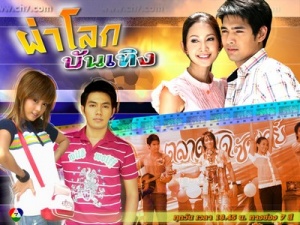 Bangyikay…a district near the outskirts of Pra Nakorn is a plentiful district. There are fish in the water and rice in the fields. The disorder and hilarity ensues here where the K. Khai Family lives in a condominium on the water. There are 4 siblings… Khunpol (Arnas), Khabuan (Dong Sira), Khem (Nattapol), and youngest sister Khantong (Mint Mintita) The barbershop of Loong Nam (Krung Srivilai) is near the K. Khai’s condo. Loong Nam has 3 children…Nampeung (Yui Jiranan), Namfon (Prae Waraporn), and Nam-Meuk (Krit).

The K. Khai family dreams of being famous musicians so they can use the money to better their family life. Khunpol likes to invite Khabuan and Khem to sing on their floating condominium in order to catch the eyes of Nampeung and Namfon. However, everytime they sing, they cause Loong Nam’s flowers to wilt all the time. This causes Loong Nam to dislike the K. Khai family even more so.

Another family that causes a ruckus is the family of Sia Somboon (Kriengsak), a wealthy family that owns a lot of mills and land. This allows him to be a powerful figure in this small district. Sia Sam-Arng (Boy Sitthichai) is his beloved son, and his sister Look Tor or Sandy (Nattkamol) was sent to study abroad. Her vain behavior veers more towards those of a foreigner. Both Sia Sam-Arng and Look Tor like to cause problems with the K. Khai family.

At Bangkok, Singh Tho (Attachai) a millionaire is throwing a party to welcome his son Satang (Aou Panu) who has just come back from Germany. Singh Tho sent his son to study Business Administration in hopes that he would look after the company but Satang veered toward computer and technology invention instead. Singh Tho forced Satang to work to the point that Satang became bored. He wanted to do what he loves which caused his father to become angry and threw him out of the house. He even refused to give any inheritance to Satang. Satang is a stubborn person so he left home to go stay at Bangyikay with his nanny Nom Kao (Chalao), the nanny that raised him since he was young. There, he met Namfon accidentally who misunderstood his intentions for finding Nom Kao, but in the end he found her.

Singh Tho found out that Satang was staying with Nom Kao at Bangyikay so he sent Chalard (Yingyong), his henchman to cause problems for Satang so he wouldn’t be able to stay there. Satang is occasionally bothered until the K. Khai family passd by and helped him. There, they became close and Satang follows the family around he he can be closer to Namfon.

Bangyikay is burning up with the jealousy that Sia Sam-Arng has with Khunpol. Although Sia Sam-Arng knows that Khunpol likes Nampeung, he tries in everyway to have Nampeung be his instead. He takes his henchmen to go bother the K. Khai family and flatters Loong Nam so that he will be on their side. He also bad mouths Khunpol so that Loong Nam will hate him even more so. Satang creates a hi-tech barber chair for Loong Nam which pleases him very much. He also creates a tandem bicycle for the K. Khai family so they can get around easier with lots of people.

Sia Somboon uses his power in Bangyikay in hopes of seizing the land to sell it so foreigners can build a golf course. But one piece of land belongs to Singh Tho, a bitter rival of his.

The battle for land occurs between Sia Somboon and Singh Tho. It’s flames fan out to Satang and the K. Khai family who has to help fight against Sia Somboon and Sia Sam-Arng. How will the events carry out? What about the love between Khunpol & Nampeung, Satang & Namfon, Khabuan & Look Tor, Sia Sam-Arng & Khantong?