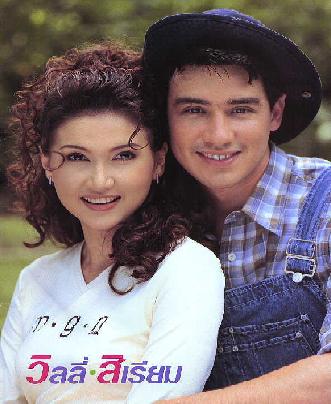 Oulit is the son of Outai, owner of the Sukupun Co. Outlit’s mom died when he was quite young. His aunt, Pen was the person who took care of him after his mom’s death. Oulit was a player and so slimy like a fish that no one can catch him. His aunt was worried about him, so she planned to arrange a meeting with Jantani...for him. Jantani was the daughter of two cheapskates, Polron and Neuon. When Oulit found out, he drove a car and hit Jantani’s fence at her house. By doing this, he had to pay for all the damages done to Jantani’s home.

After the incident at Junatani’s house, Oulit was force to pay for the fence he broke. Oulit said that he had no money, so he asked if he could repay with something else. Jantani offer an answer...she told him to fix the fence himself. Oulit agreed and started work the next day. Oulit found out that everything at Jantani’s house cost money...even the materials used to fix the fence. Jantani felt that he deserved it for all of his actions. Jantani’s mom was the one in charged with collecting money from Oulit...EVERY THING cost money! Oulit was gone for a couple day after he kindda fix the fence...he said that he was waiting for the cement to dry. When he came back, it was the same day Jantani found out that he was not a poor...Oulit she knew. Juntani and her family were surprised that an annoying Oulit would turn out to be one of Juntani’s suitors. Juntani was furious at Oulit’s actions. She said that she was annoyed by him, but know hated him. With these words, Oulit vowed that this would be the last day he will come to her house. After that day, Juntani seem to miss him a little. When Oulit found out about this, he went back to her house. When he got there, Juntani asked him why he came back. He said that he needed to come and finish fixing the fence.

Oulit and Juntani’s dad, Ron...went to a Cafe where Ron met a singer name Kat. He fell in love with her...he even gave her his gold necklace to show his affection towards her...and continued to go with Oulit from then on. Neur-On, Juntani’s mom decided to make a birthday party for Oulit so he could help her with some money...but unfortunately...it wasn’t his birthday. But Oulit helped her any ways. Juntani went to work at Oulit’s company at the organization part. Her first job he assigned her was to go and organize a wedding for his chauffeur...she agreed, because it was to help a person in need.

Yai, Jantani’s older sister had a plan for Prasut (played by Puti as one of her suitors) to bring Jantani to the forest...but Oulit was ahead of the game. He had brought Junatani, her best friend, Doc. Sushada, Jantani’s parents and his best friend...Yute(a policeman) to his vacation house in the woods. Yute and Sushada were now more close...knew each other more. Oulit had a plan...he was going to hire a tiger to come and scare them, while he saves the day. Juntani began to feel that he was a real gentle men...too bad, his secret was revealed.

Oulit ask his olders to go ask Jantani her hand in marriage. Jantani agreed. Jantani’s Mom, Neuron was so happy that she told the press about the marriage. On the Wedding day, Susie came to the wedding with a wedding present that was meant for the dead. Susie was Oulit’s old girlfriend (not really)...but came to say good-bye. Jantani was really mad at this incident, that she told him straight out that she will not sleep with him, until he go get a blood test. The next morning, he went with Yute, his best friend, to get their bloods checked. The result came out, that Yute had AIDS ((I really hope not, because it will be so sad))...and Oulit has cancer in the blood cell or something...((I really hope that both will be okay...)

When Jantani found out that her husband, Oulit, had leukemia, Jantuni treated him really good, to make him feel happy before he dies. Sushada gave hope and encouragement to Yute, with coping with AIDS. Oulit and Juntani decided to help Outai, Oulit’s dad get together with Pen, his aunt. They lied to Pen, that Outai has a beginning symptoms of heart disease or heart attacks. Pen began to feel sorry for Outai, and decided to take him into consideration. For all the deadly diseases, it was not true...they had a mixed up with the test and that had made a big mixed up with their lives. They were now back to normal. Jantani was now back to normal, trying to make her husband follow her and to become a good person...for the future of their marriage. Jantani soon had signs of being pregnant....

Oulit got caught with Susie by his wife, Jantani. After that, he decided to brake up with Susie and go back to his wife and his future baby. When he went to Susie, Jantani followed and saw them hugging...Jantani was furious and ran away. Jantani went to live with her parents again. Oulit tried to get back with her...but she had an agreement, he had to go to her house everyday, to have lunch and dinner there. He did as told. Juntani and Oulit had a son together and Yute and Sushada had a daughter. They both decided that their kids should marry...we will have to follow what happens, because this is the end of the movie!!!

The End--- Thanks to Saovoly of Willy McIntosh Fan Page