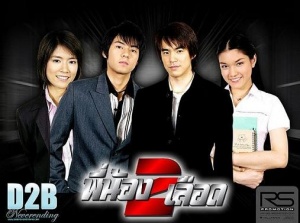 Dan and Nat were attending the same school. Dan always had a crush on Nat but Nat never took interest in him because she was dating Beam. Donut and Dan were good friends who were poor. Donut liked Dan but he didn't like her that way more of a sister. Beam has a younger brother who was disobedient and never listen, went out a lot til one day he died because of an accident. But before that, Donut, Dan and Beam's brother had a altercation.

Dan ends up working in Beam's company but they were more rivals when it came to love and work! Donut also gets hired at Beam's company.

--there is a twist at the end-- who is going to get with who?