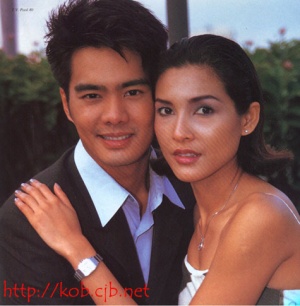 Noi's boyfriend (Num K.) just returned and she went to pick him up and they went to her house and she was informed that he had gotten his niece pregnant and he has to take responsibility for it. Noi is extremely disappointed but remains stable. She at first has a like innocent look as well as a nerd. but her friend transformed her into a very sexy girl and she caught many guys attention. Of the guys Kelly was one also. Noi had come to Kelly's business to sell land I think and she bumps into Kelly and Kelly is mesmerized by her beauty. Though she thinks of him as any other guy; a pig. One night Kelly was out with his friends and Noi was out on a business thing one on one with an old guy that wanted her. They drugged her drink and when she was about to drink it Kelly stopped her. For this the old man ordered his men to fire and Kelly grabbed Noi and ran for their lives. They ended up going to her house. She lives with her grandmother in a house in the countryside. Her grandmother was charmed by Kelly and clicked with him as Noi despised him. Kelly also learned that Noi was his brother's ex-girlfriend but didn't care.

Kelly was hospitalized when he saved a boy from drowning and was hit it the head by the head of a boat and Noi took him to the hospital and paid for the expenses and he asked to come to her house once again. He won the hearts of her housekeeper and her grandmother. Her grandmother wanted him as her grandson so she asked them to get married. The only way that they both would agree was that she told them that she had cancer. Both wanting to make her happy agreed to get married.

Unfortunately on their wedding day a convict escaped and interrupted their ceremony and kidnapped them both. On this trip they became closer cause Kelly would save her life many times as well as saving her from being forced to sleep with the criminals. As Num K. went to the country on a business trip and meets a self-righteous tom boy that is tuff. They both do not get along and from the beginning. He thought of her a child that has not grown up. Which made her even more mad leading to her making continuous pranks at him. As soon as Num K. found out that Noi was kidnapped as well as his brother he rushed to help find them. The tom boy wanted to prove that she was grown and so she snucked into the car and went along with him. He found her and sent her back but she would not go. the tom boy also realized that she loved him at this point. but Num K. had never gotten over Noi so he only focused on saving Noi

They finally got to them and Kelly and Noi were saved and Num K. and Noi were reunited once again. Leaving the tom boy and Kelly depressed. Though Noi never really wanted to reconcile with Num K. cause she now realized that she was developing feelings for Kelly. They had gotten married because the grandmother faked the cancer again. Though they didn't quite live a happy life cause Kelly always thought that Noi never really loved him.

It was revealed that Pakjira did not get pregnant by Num K. but she had a boyfriend in America and he came to find her. She pulled the prank cause she wanted to get even with her boyfriend whose parents did not accept her because she was not an American women. Now that Noi knew that Num K. was off the hook, Kelly decided to let her go thinking that she wanted to be with Num K. Pakjira also wanted to patch up the wrongs that she did and wanted to get Num K. back with Noi.

Noi although had already fallen in love with Kelly. So on the day that they were going to get divorced he asked her if she regret marrying him and she said yes. His heart dropped and then she added she regret not marrying him sooner and they decided to stay together. Num K. also realized that his heart was not in love with Noi and it was with the tom boy he loved. So he returned to the tom boy and asked her for her love.Of course she agreed and this lakorn ends happily with happy couples and with Noi pregnant and Num K. and the tom boy are soon to be wed.