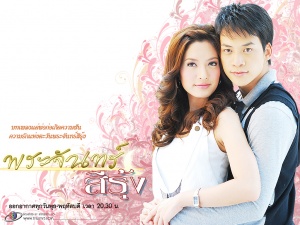 Pongpat Wachirabunjong is Bie Sukrit’s father, his character is Aruk. He is a katoey (transgender) who works as a gay cabaret dancer for a club. When his neighbor, Oradee (Mam Jintara) gives birth to a baby boy and abandons him, Aruk takes the child in and becomes his father. Oradee is a prostitute and her child was conceived from a customer. Not wanted to endure hardship of being a mother, she abandoned her son and ran off with her farang boyfriend to live aboard. Oradee’s son is Tawan (Bie Sukrit).

In order to create a normal life for Tawan, Aruk decides to suppress his “gay” tendencies and devote his life to Tawan. He quits his job as a gay cabaret dancer and moves to Chiang Mai to open a hair salon and start his new life as a heterosexual man. Tawan knows about his father’s past but still respects him. 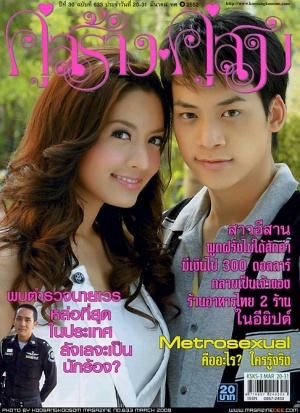 Tawan grows up to be a wonderful, intelligent kid. After finishing high school, he is accepted into a Bangkok University. He attends university with Plaifah (Aff Taksaorn), a young woman from a rich family. He falls for her but she has no feelings for him. Fate also brings Tawan to meet his mother. Oradee owns a coffee shop near the university charging students outragous amounts. Unaware that Tawan is her son, she forces him to work for her after he accidently broke her cellphone, deducts his wages to pay for her phone, at the same time, mistreating him. During a play where Tawan and Plaifah are casted as the lead characters, Tawan gives Plafah a real kiss instead of a fake one upsetting her bad. Oradee also learns of her son's reationship to her after hearing Aruk console Tawan. Seeing potential in Tawan, Phaifah's older sister signs him up with her record company. Plaifah and Tawan also starts dating, after Plaifah catches her fiancé cheating on her. Seeing that her son is becoming famous, Oradee decides take advantage and come back into his life. Heartbroken that his mother was not who his father had describe her to be Tawan tries to escape his evil mother, Tawan ends up in a car accident losing his memory in the process.

Even though Tawan doesn’t remember Plaifah, he still hold feelings for her. But his mother changes him into a whole new person. No longer is he a kind and generous person, he turns into a cruel and mischievous man.

Oradee makes sure that no one knows of Tawan's amnesia and makes sure no one tries to revive his memory to ensure that she can still feed off his fortune. Kayul finds out later though and uses that as an oppurtunity to win over Tawan's heart. Meanwhile Oradee lies to Tawan and makes him hate his father and Plaifah.

Aruk later finds out about Tawan's amnesia and askes Plaifah to help him regain his memories. Aruk's health is in jeperody because of a brain tumor that is slowly growing. However, he refuses to get surgery because he want Tawan to get his memories back and he's afraid that if he does get surgery, he too may end up like Tawan and does not want Tawan to suffer like he is now. Plaifah only succeeds in helping Tawan remember their times at the university and bringing back his old personality before Oradee found out and went to great lengths to prevent Tawan from seeing Plaifah again while she finishes draining Tawan. Later Oradee disappears.

Sarin later fakes a corruption case against Plaifah's father. The only way to save her father is to marry Sarin. Tawan goes to the wedding to try and stop it. The women that Sarin was cheating on with Plaifah then stroms in a jealous rage, reveals everything about Sarin and shoots him point blank. Because Tawan blocked a bullet that was meant for Plaifah's father, her parents now hold more respect for him. After all the drama, Plaifah tells Aruk's true idenity to Tawan. While resting for the night, Tawan remembers his father.

When Tawan and Plaifah tries to locate Aruk in Chiang Mai, he is longer there. Aruk already left losing hope that Tawan would ever remember him before his (Aruk's) brain tumor killed him. But Tawan is able to find Aruk after remembering his father's dream house. Aruk chooses not to tell his son about his condition not wanting Tawan to lose his happy expression and making Tawan feel guilty. Tawan and Aruk are able to spend a few father and son moments together before Aruk succumbs to the brain tumor.

Tawan continues his singing carreer in order to pay for Aruk's surgergy and the hospital bills. During the concert, Tawan confirms to his fans that his father is indeed gay, but he doesn't feel ashamed of it. He tells them how Aruk came to be his father then sings a song as a tribute to his father. Aruk wakes up from his coma while hearing the concert on the television.

After the concert, Tawan learns of his father and rushes back to the hospital. The doctor reveals that Aruk not only lost his memories, he lost all of his surival instincts. Tawan buys his father's dream house and takes them to live there hoping it will help his father remember. At the same time he asks Plaifah to help find his mother.

Plaifah soon learn that Oradee is staying at a hotel hiding from thugs she owns money to while using her old name when she was still a prostitute. By the time Tawan and Plaifah arrives, Oradee is already captured by the thugs. To no valid, Oradee begs for her life while the thugs prepare to kill her. Tawan comes at the last second, and despite everything her mother has done to him, shields her from the bullet. At the same time, Aruk remembers Tawan again after rewatching Tawan's song to him. The thugs are taken by policemen Plaifah called while Tawan is rushed to the hospital.

Oradee seeing how her son was willing to give up his life to protect hers feels gulity about all the things she had done to him and apologizes to Aruk when he shows up at the hospital. Tawan then regains conscious and ask his mother to come live with him and Aruk. She refuses though since she still cannot forgive herself but tells Tawan that she is going to cash everyting in her account, sell her car and house and give them to him, and also promises that once she can forgive herself, she will come back. Both Tawan and Oradee share a tearful goodbye. Years later, Tawan proposes to Plaifah and she accepts.