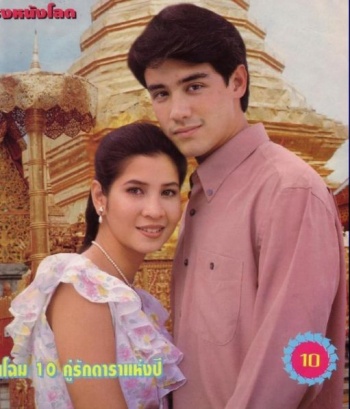 This is a period drama as it takes place in the 50s. Lailita or Mew's character is a princess from an old noble family. However, her father has been dead and the family's fortune is in ruin and so her mother decides to marry a wealthy Chinese businessman to alleviate the family's financial burden. Lalita is against the marriage because she doesn't understand about love and she thinks the Chinese man is beneath her. Her stepfather also wants her to marry his nephew who is despicable. So she leaves her mother in order to make a living on her own instead of depending on her stepfather's charities. She decides to go to a friend that she hasn't seen in a while. This friend lives in Lampoon. On her journey to Lampoon she meets Willy's character, Mau Palod, who is seeking a teacher/nursemaid for his disabled and mute sister. At first Willy doesn't pay attention to her, but when Lalita finds out that her friend doesn't reside there anymore Willy asks her to become his sister's teacher/nursemaid.

To make a long story short... while Lalita lives with Willy at his castle, which she calls Dark Castle... they fall in love with each other. Lalita doesn't tell him who she is and tells him that her name is Kroo Uma. But before they could be happy Willy's past comes alight to haunt him. He thinks that he killed his ex-wife because he found out that the wife never loved him and the wife had a lover. But it turns out that Willy didn't kill his ex-wife, it was the house keeper who wanted her secret daughter to marry Willy. The house keeper had planned everything. Another subplot to this story was that Willy had another sister who looked just like his disabled and mute sister. After the disabled and mute sister died, Willy found out about his other sister and brought her to live with him and Lalita. At the end all the secrets were revealed and everybody knew that Willy wasn't the killer. Lalita reconciled her relationship with her mother and told her mother that she didn't understand about love before but she understood it after she had gone through all of the ordeals with Willy and that she asks for her mother's forgiveness. Mother and daughter forgave each other. Willy and Lalita became engaged...Willy's sister became engaged to Willy's neighbor. And everyone was finally happy.