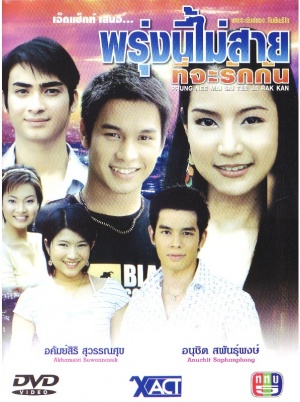 JAKAJUN[FAH]'s sister married OH[TUX]'s dad so they became in laws. Oh sells printed t-shirts in a open market so Jakajun came down from town to help him out. They didn't know each other but ended up meeting each other at a local market. She then moved in with him to help him out. Pae who is the rich girl in this lakorn is dating Wee who is a player. Sai who is Oh's younger sister went to the same university as Wee and had a big crush on him. She would write in her lap top about him and everything. One day Wee and Pae had a date together so he went to the restaurant to wait for her. When she arrived and they sat down, Wee got a phone call from another girl. Pae took the call and was furious so she left Wee. Wee went after her but she drove away already. Pae's car was out of gas so she walked out. She went to an alley and saw a guy there so she got freaked out and basically tried to run away. She hid with a stick and as that guy approached, she started hitting him with the stick. She didn't know that the guy she was hitting was Tux so she kept hitting away until he told her to stop. The guy who she thought followed her wasnt Tux but she thought it was him. Well they talked it out so they both ended up getting some gas for her car. After that, they started seeing each other often. Rich girl Pae would help Tux out and Jakajun[Fah] would often get jealous and be short tempered. Fah would scream and yell at Oh and he wouldnt know why? Fah met a guy and afterwards he kept following her. She got soo scared so she ran into a market/house for help. The people in there helped her but that guy who followed her ended up being their son Toey[that part was funny] Afterwards they became great friends. They would hangout and Pae and Tux would hang out. Wee used Sai as a rebound but Sai didnt care cause she loved him too much. There was an incident where Wee found out that Sai and Tux were brother and sister. Tux was also dating Pae. So to get Tux back, Wee took Sai to a hotel on the day of Pae's birthday. It basically ruin the day where Tux went to the hotel to get Sai back and wentlate to her party. Beat up Wee at the party and Pae saw a side to Tux that she didnt like. Besides that, Pae's mother didnt even like Tux cause he was poor. After everything, Tux and Pae rarely talked. From there on, Fah and Tux got even closer. They did a lot of things together where her feelings grew more for him. But like a pra'ek he never noticed. Toey really liked Fah but then Fah didnt like him that way. Sai ended up getting pregnant by Wee so she left back to her dads place in town.

--Toey ends up getting sick and Fah moved in with his family to help him out. --Pae and Tux's relationship became rocky. --Would Wee accept Sai because she is pregnant?

watch and see what happens!