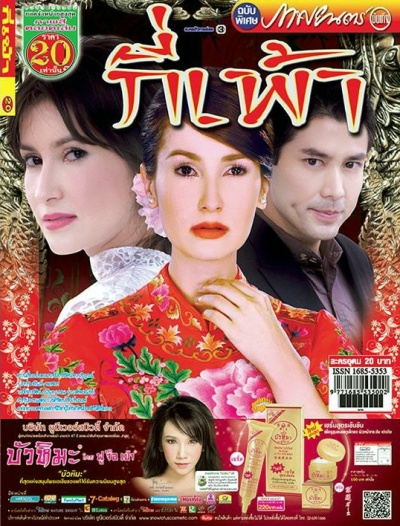 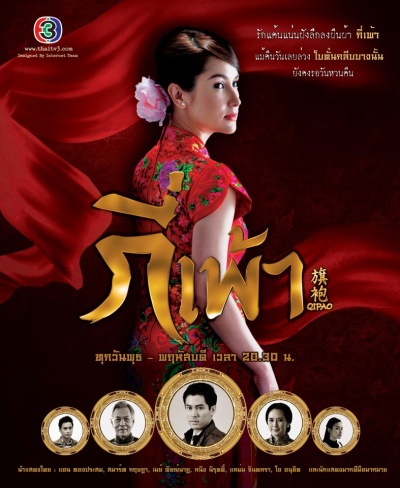 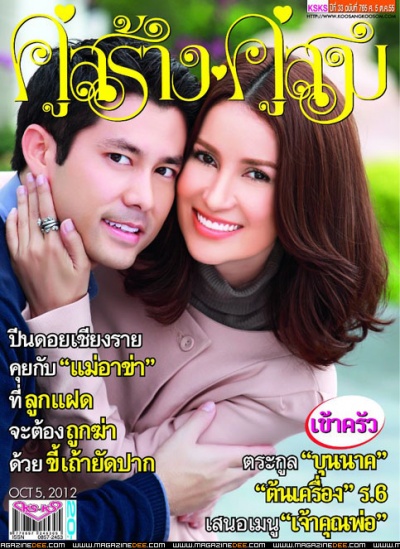 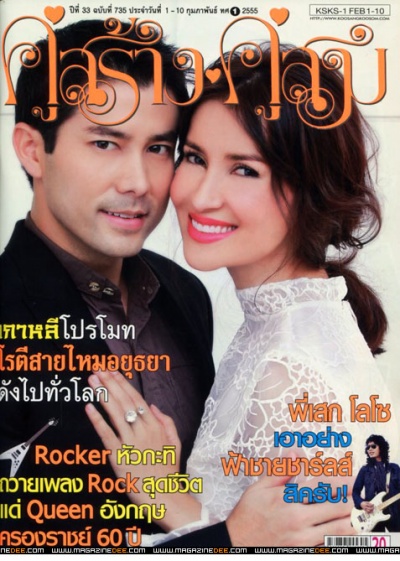 “The traces of love and the power of revenge are buried in the beautiful Qi Pao. No matter how much time has passed, the thin petal botan flower (orchid cactus) is still waiting to return...”

Paeka or Pink is a Thai curator who works at the Asian Institute of Textile & Apparel in Thailand. She is a tall, hard working Thai woman and greatly adored by Harold, the managing director of the institution.

One day, Paeka met with a tall handsome man with eyes like those of a Chinese person. That person is Jao Ming Tian or Daniel, he is the son of Jao Wern Yeuy, the owner of the 30 Qi pao dresses that was presented for the exhibition. Jao Ming Tian came to supervise those Qi Pao for his father who owned one of the largest pharmaceutical manufacturing companies in Hong Kong called “Jao Jern Wern.”

Jao Wern Yeuy and his wife, Wang Lee Ping, who is also a pharmacist, started out with a small drug store until they expanded it into a large business. His family is now a wealthy family with a mansion in Hong Kong. Jao Wern Yeuy’s hobby is collecting vintage clothing and Harold knew that he has many valuable Qi Pao in his collection so he persistently asked for them to be shown at the exhibition until Jao Wern Yeuy agreed.

Paeka admires the handsomeness, the charming, and the clever intellectual abilities of Jao Ming Tian but she feels that he is troubling on the inside. He kept to himself so often that he became a cold person, he has often looked at her in a displeasing manner and sometimes, he has even gotten irritated with her.

Paeka and her assistant, Daisy, worked together excitedly as they manage the Qi Pao dresses because every individual Qi Pao that was sent over by Jao Wern Yeuy was more than a hundred years old and they were all in excellent condition. When they came upon the last box of Qi Pao, box number 30th, while Paeka was taking out the Qi Pao, a bag of velvet cloth came out of that box too. When Paeka slowly unveiled the bag, she was surprised to see a well knitted Qi Pao. It was a new red Qi Pao with a pink botan flower (orchid cactus) patterns but what was strange was that the chest area was ruined by a piercing and stabbing marks.

Harold decided to have Paeka use this special Qi Pao as their main attraction. Paeka started to feel captivated by that Qi Pao so she secretly tried on the Qi Pao number 31. She had a strange feeling that the Qi Pao she was wearing really belonged to her but before she realized it, she started to feel light headed. In the mist of the dizziness, she heard the sound of people arguing. Then she saw a hand holding a sharp knife stabbing violently at her chest until she begin to feel even more light headed until she fainted. Paeka didn’t know who the person stabbing her was but the only thing that she remembered was that she tried to fight back and the hand was wearing a jade bracelet with a dragon on it. The struggle caused the bracelet to break into two pieces and Paeka fainted after that.

Harold was in trouble so he asked Paeka to convince Jao Ming Tian to continue the exhibition. Jao Ming Tian had to stay in Thailand to do business for another three weeks but when Paeka wouldn’t stop nagging him about the exhibition even though he told her to go away, he decided to hire her as his personal secretary. He took her up north and down south looking for Thai herbs for his business. During their time together, he was always angry with her, Paeka misunderstood and thought that he wanted the Thai herbs all to himself. The two of them argued constantly during their chaotic trip and they would tell one another to go their own separate ways. On their trip, they also had a driver and Jao Ming Tian’s right hand man name ‘Ar Thung.’

Paeka doesn’t know the reason of Jao Ming Tian’s anger was that he once was in love with a woman who unexpectedly passed away. This made him full of sorrow and Paeka coincidentally had many similar traits as his old lover. Paeka is a straight forward woman, loves to do the right thing, she’s nosy, she’s clumsy, and loves to cause trouble for him. This irritates Jao Ming Tian and he doesn’t like to be near her, but at the same time, he couldn’t help getting involved because he’s worried about her.

In the middle of the rough environment, Paeka was getting closer to Jao Ming Tian and she found out that, that Qi Pao belonged to May Lee or Sukonta, Jao Ming Tian’s old lover. Jao Ming Tian asked Paeka to fix the Qi Pao for him and he will talk to Jao Wern Yeuy about re-opening the exhibition. Later one night, the weather was very cold and Paeka was wearing a thin shirt because she didn’t bring any sweaters so Jao Ming Tian took off his shirt and put it on her. At that moment, Jao Ming Tian’s wrist was visible for Paeka to see the jade bracelet, the same kind of bracelet that she has seen during her light headedness. His bracelet was broken in the middle but the two broken pieces were molded together by a gold wire. Jao Ming Tian explained that it was normal for many Chinese men to wear a jade bracelet because a jade can help a man be more powerful. As for the bracelet that he’s wearing, Jao Wern Yeuy had obtained a large piece of jade ten years ago so he made one bracelet for every member of the family to remind them that their bracelets all came from the same piece of jade. It was also to show that they are from the same family with the same bloodline so they all should love one another.

Paeka was more worried than ever because this means that the murderer was someone in the family. Paeka returned home with a curious feeling, she didn’t want to believe that a man with a gentle and charming smile could be a cold hearted killer…

After the exhibition, they prepared to send the Qi Pao dresses back to the royal family. Paeka was trying to find a way to research more about the red Qi Pao and at the same time, Byron, a student intern, accidentally made a rip in one of the pink Qi Pao. That Qi Pao was very high in value and after checking the damage, they realize that they will be able to fix it up but it would take at least five or six months. When Jao Ming Tian heard of the news, he was very angry but he was relieved to know that Paeka would be able to fix the damage. Jao Ming Tian agreed to let her fix it but only if Paeka agree to travel to his family’s mansion in Hong Kong to finish the job.

Paeka agreed to accept this job because she wanted to learn more about the red Qi Pao and what happened to May Lee, the owner of the Qi Pao, and whether Jao Ming Tian was her killer.

When she arrived in Hong Kong, Jao Ming Tian took her to pay respect at a temple, but while she was praying, a tall, thin Chinese man ran into her. Paeka was startled but before she knew it, the man handed her a piece of paper. When she opened the piece of paper, there was one Chinese word written on it, the word said “si” (or “xi”) which means “death.”

At the royal mansion, Paeka got to meet Pao Lin and Xiu Lan, Pao Lin was the maid of the mother and daughter, Lin Meuy Ing and Jao Lin Peuy. Pao Lin was full of arrogance just like her bosses and she didn’t like Paeka the first time they met. As for Xiu Lan, she is friendly and likes Paeka very much. She was Jao Ming Tian’s babysitter when he was young, she’s been serving the royal family for many years and Jao Wern Yeuy trusted her enough to give her a jade bracelet as well.

Paeka also found out that Wang Lee Ping had two sons, Jao Ming Sarn and Jao Ming Tian, but Jao Ming Sarn passed away many years ago. In the past, Jao Wern Yeuy met with Lin Meuy Ing when she was a singer at a night club so he took her in as his second wife. This made Wang Lee Ping very sad so she turned into a distant and cold woman. Before becoming Jao Wern Yeuy’s wife, Lin Meuy Ing had a husband who was a gangster and he got sent to prison for life. Lin Meuy Ing also had a daughter with her ex-husband so Jao Wern Yeuy adopted Jao Lin Peuy to be his daughter. Paeka was arranged to stay in the “flower” room making Jao Ming Tian uneasy because it used to be Sukonta’s bedroom.