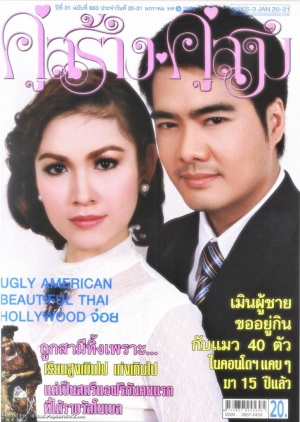 Kob will be playing Mom Dara Roong, a bitter woman, bruised by love, bruised by men and their philandering ways. Her father cheated on her mother, her lover played by Kelly Thanapat cheated on her and later married another woman. She hates the male chauvinist society to which she is living in, but can’t escape.

Roong has 3 younger sisters, Mom Dara Rut (’Nok’ Usanee Watthana), Mom Dara Noi (Som Thansinee) and Mom Dara Nitja (Min Phitchaya). She loves them dearly and made them vow never to marry. Of course it doesn’t work out that way because they want relationships, they want to fall in love, but Roong’s bitterness towards life and love makes it difficult for them. Her 2 sister didn't believe her so they all got married and they left her. Each sister befalls some sort of grief with their husband whether it be adultery or poverty. Dara Roong hated them for leaving and she didnt want to see them again.

Nitja or Daranit, the youngest, also falls in love with the next door neighbor Muanglek. They grew up looking at each other over the fence and in college, they tease each other mercilessly. Nitja has a female friend who secretly crushes on her and schemes with Dara Roong to keep Nitja away from Lek. When Dara Roong finds out she forbides Nitja from seeing Lek. Dara Roong goes so far as to chain up Nitja in one of the lower rooms without sunlight or anyone to talk to. Only Dara Roong and Daranit's friend can come and go as they like.

Daranit is rescued from her prison within her own home and marries Lek. Dara Roong cuts Daranit out of her life and refuses to acknowledge those who do not follow her orders. She falls for a young man she meets in the city,Chatree, unaware that this boy is her biological nephew. Dara is set to wed Chatree after she sets fire to her own home after inviting Daranit and Lek over for dinner. Dara wanted to burn her younger sister but only ended up scaring her own face forcing her to realize that beauty is nothing. On the wedding day, Dara is shocked to find that she was about to marry her own nephew and has a mental break. She goes berserk and dies alone with enormous pain.