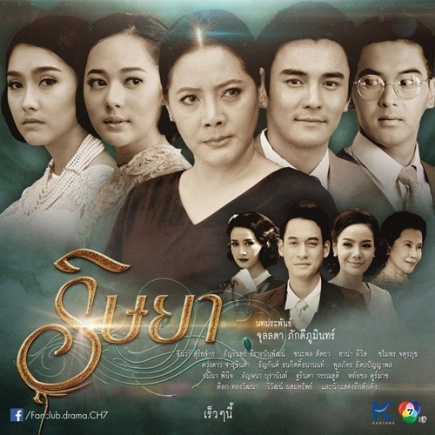 Mom Chulee (Maew Chamaiporn) is a very grudgeful lady. She is proud of her noble blood and status because she is the daughter of a Jao Khun and was married to Than Chai. Therefore, she was extremely bitter when her sister, Chuanchuen (Angsana Buranon), ran away with Chanop (Moo Dilok), a gardener. The bitterness caused her to isolate her family and everyone living in Ayothaya palace from the outside world. Even her mother on her deathbed was not allowed to see her sister.

Heaven continued to play a cruel joke on her by having Than Chai taking a low status maid to be his Mom. The maid gave birth to a girl named Mom Rajawongse Wansika Ramapong (Tubtim Anyarin), while Mom Chulee had a son named Mom Rajawongse Hariphun Ramapong (Aof Channapol). Mom Chulee resented the slave wife so much until Than Chai couldn't take it anymore and committed suicide. While Khun Chai Hariphun was sent to study abroad since he was a kid, Khun Ying Wansika was forced to stay at home to be a maid. Ying Wan grew up in the hatred and disdain of Mom Chulee and one of her distant relative, Aobsawart (Yok Thanyakan), who was taken in to be her maid.

Years passed and the kids are grown-ups. Chanop and Chuanchuen has two kids, a girl named Chonanee (Hana Lewis) and her older brother named Chanok (Thanwa Suriyajak). One day when Chanok was cruising the river he saw Ying Wan running from the abuse of Aobsawart and instantly protected her. From that moment the image of the mysterious, hard-headed and untalkative Ying Wan was embedded deep into his heart, despite him having a lover named Yothreeda (Mo Ameena).

Mom Chulee wants revenge against her sister who gave up her status to be with her husband, so when Khun Chai Hariphun returned from abroad, she plotted to have him marry Chonanee, knowing fully that he slept with Aobsawart. Khun Chai Hariphun knew Chonanee since she was his student, and at first had no intentions to marry her. However, Chonanee secretly liked him and wanted to go along with the marriage. Khun Chuanchuen also saw this marriage as a way to make amends with her older sister so she gave in. Due to the pressure from the elders, Khun Chai Hariphun agreed to marry her, but after that he continued to sleep with Aobsawart, until she is pregnant with his child. Chonanee is heartbroken and returns to her house, while Chanok is furious and beats Khun Chai Hariphun many times. Things get complicated when Chanok misunderstands that Ying Wan is the one who plotted the revenge so that she can get with Khun Chai. Even more things happened when Yothreeda announces that she is pregnant with Chanok's child and tells Chanok to marry her. In reality, Yothreeda's father is in heavy debt due to gambling, and she was raped by the Sia as the way to pay off her father's debt.

As for Mom Chulee, she doesn't want a child that has low blood like Aobsawart so she tricks her into drinking drugs that causes her to miscarriage painfully. At the same time Khun Chai Hariphun finds out that Aobsawart has an affair with Doctor Takeshi (Louis Ummarin), so he dumps her and tries to win back Chonanee's heart. Aobsawart is furious and plots a plan to avenge both Mom Chulee and Chonanee. However, this time he's not getting it easy because of the protests from Chonanee's family and the involvement of Chanok's friend, Jet (Pol Phoolapat).

Gradually, misunderstandings are resolved and Chanok announces his love to Khun Ying Wansika. However, Mom Chulee is extremely resentful that she tries to lock Ying Wan into a room and never lets her see the outside world anymore. Luckily Chanok rescues her and bring her to Than Ying Nuan's palace. Than Ying Nuan is the sister of Than Chai, and have shown sympathy for Ying Wan she was a kid. Ying Wan lives the happy days she never had until Mom Chulee fakes her illness and has Aobsawart abduct her to a house to torture her even more. Once again Chanok comes to the rescue and Mom Chulee has to let Ying Wan go, out of fear that she would get arrested by the police for abducting people and ruining her reputation in the process.

For Chonanee, after experiencing life and death moments with Khun Chai, she realizes she still loves Khun Chai so much and wants to get back together with him. However, this time Khun Chai Hariphun is the one who pushes her away after he knew the bitter truth about his origin: His mother was not Mom Chulee, but a maid name Saiyoot. Mom Chulee's child died at birth so she abducted him from his real mother to raise as her own to satisfy her hatred. Khun Chai Hariphun no longer feels adequate to be her husband and plans to go abroad so Chonanee can find a man that's good enough for her, not knowing she is pregnant with his child. This causes both parties to be heartbroken, while Aobsawart is overjoyed because she still wants to be the wife of Khun Chai. Because Mom Chulee has given her the Ayothaya palace when she died, so Aobsawart takes a poison from Doctor Takeshi and poisons Mom Chulee's tea until she is handicapped. Aobsawart then goes on a fury and kills Mom Chulee in the process to satisfy her hatred.

Anyway the beans are spilled by Ying Wan accidentally so Chonanee and Khun Chai Hariphun comes to an understanding and lives together as husband and wife like before. This causes extreme bitterness in Aobsawart so she plots a plan to get rid of both Chonanee and Khun Ying Wansika. Aobsawart lures Chonanee to Ayothaya palace, only to knock her down and take her hostage. While finding Chonanee, Ying Wan was also hurt by Aobsawart and was too, taken hostage. Aobsawart then starts a fire to kill both of the ladies, but her plan backfires and she dies tragically in the fire with Mom Chulee, who is now a rotten corpse. Ayothaya Palace is burned down.

Fast forward years later, Chanok and Khun Ying Wansika has a young daughter and another child on the way. Meanwwhile, Khun Chai Hariphun and Chonanee returns from abroad with their son. The four of them are filled with happiness and playfully contest which family will have more child. Chuanchen and Chanop is overjoyed because peace has finally come to their family and they get to spend their happy time with their children and grandchildren. Jealousy was now a thing in the past and is replaced by love. THE END.