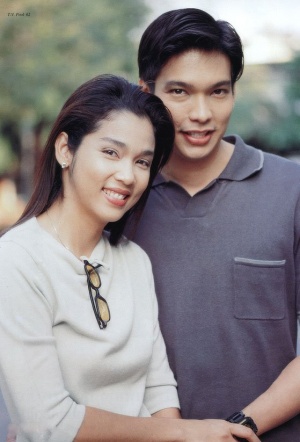 Rawit is not too wealthy but he’s not completely poor either. Kelly on the other hand is wealthy and he is seeing Kimberly. Kelly and Tok used to live in the same town and when they were younger they were really close. As a kid, Kelly asked Tok to marry him and she said yes. Unfortunately, he had to come to Bangkok and enrich his studies. He forgot about her ever since and now in love with Kimberly.

At this point Tok’s mother is in debt and she needs some way to pay it off. She remembers Kelly and the proposal that he made and she went to his mother and she wanted her daughter to marry him knowing that they were a wealthy family. When they both find out about the marriage they both disagree. Kelly remembers a dark and not very pretty young girl and he wants out because he has Kimberly.

Kelly comes up with a plan to have someone else be him while Tok comes to visit. He also wants the person that is playing him to turn her down. He knows Rawit and Rawit was in need of a job so Kelly offered him the job and eventually he accepted.

When Tok arrived she dressed-up really wild. She dressed in these old looking clothes with lots of different patterns and it was an eye sore. This really turned Kelly and Rawit off but Rawit was much nicer about the fact.

The truth was that Tok has grown up to be very pretty. She too didn’t like the idea of having to marry Kelly so she dressed that way to turn him off and have him reject her. Though when she found out about the plan that Kelly and Rawit were planning towards her she wanted to get even. At a party that they all were invited to. There Kelly was going to announce his engagement to Kimberly. Tok attended the party as her true self and this really stunned Kelly. When he was supposed to announce to everyone about the engagement he didn’t.

At this point both men were in love with Tok. So the competition began. It was sort of harder for Rawit cause he was sort of under Kelly’s power. Kimberly seeing that this was so started to find more comfort in another man but she was really in love with Kelly.

As time went by Tok like began a model/designer. And she was really in love with Rawit. At one point her mother gets kidnapped and they go save her and Rawit guards Tok with his life. Making Kelly see that the two really were in love and he backed off. Kimberly was still in love with him and he loved her too. So the two got together and Rawit also won Tok’s heart.