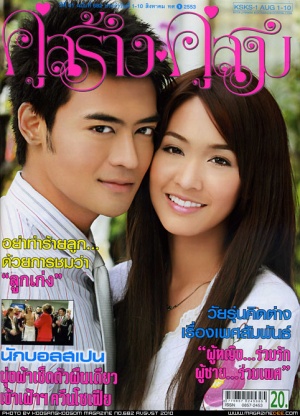 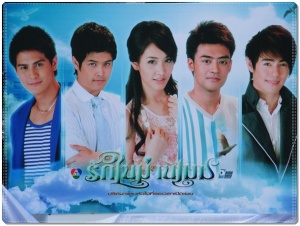 (cred: Lyn @ Iheartlakorns.com) Nong Sai (Min Phitchaya) also known as Walika, is the only daughter of Khun Win Sinwit (Phairot Sangwaribut), a millionaire, owner of a fruit orchard. Nong Sai is a very beautiful girl, but is handicapped. She has been unable to walk since birth. Because of her disability, she did not have many friends growing up, except for Pada Aphirakphubate (Tle Thanapol), the son of Khun Ying Amporn(Maneenot Samansut) and General Pat, Khun Win Sinwit’s beloved friend.

Nong Sai loved and adored Pada like a hero. Though he went to study aboard for 10 years, her feelings for him never faltered. She never forgot and waited for him to return. Even when a young flight officer Samit Kanjonrat (”TengNeung” Kritnagan Maneepagaphan) fell in love with her, she rejected him to remain true to Pada.

Seeing his daughter wait and long for Pada, Khun Win Sinwit remembered an agreement he had with General Pat to have Nong Sai and Pada wed to erase a 80 million baht (2.5 million USD) debt owed by General Pat to Khun Win. Khun Ying Amporn, Pada’s mother, was very worried about this debt. She feared losing her house, losing her fortune, so she ordered her son Pada to come back and marry Nong Sai immediately. One problem, Pada is already married to Chomphilai (”Yok” Thanyakan Thongitthananon).

When Khun Win announces he is ill and only had 1 year to live, Khun Ying Amporn uses this opportunity as a bargaining point to beg Chomphilai to divorce Pada for just one year. If not, Pada will lose his entire fortune, so Chomphilai agreed to divorce Pada.

After Pada and Nong Sai wed, Pada takes good care of Nong Sai. However, he does not touch her. When she finds a good man who will love her truly, he vows to divorce her.

In the marriage, Nong Sai had to endure many things– ill-treatment from Khun Ying Amporn and bullying from Chomphilai. Gradually, Pada began to feel the love and concern Nong Sai had for him, he is shaken by it and too started to develop feelings for her. When Chomphilai notices this, she sent her older brother Chalermchai (”Nam” Rapeepat Akekapunkul) to her pursue Nong Sai to make her lose her way.

Nong Sai leaves Pada's house after they argued and she felt betrayed by him. So, Khun Win sent Nong Sai to receive treatment aboard. Gradually she got better and learned to walk. Khun Ying Amporn was livid when she learned she had been deceived, she ordered her son Pada to divorce Nong Sai right away, but he refused giving his mother the excuse that he wanted to keep the promise he gave to Khun Win. Truthfully, it was a cover, Pada had fallen in love with Nong Sai and he did not want to lose her.

As Pada became more interested, more engrossed with Nong Sai, it caused Chomphilai to stray. She started seeing her ex-hubby/ex-boyfriend Boontheert. They began to have a sexual affair and there is a sex tape to prove that they did.

Throughout his marriage to Nong Sai, Khun Ying Amporn reminded Pada that he has Chomphilai, she loves him dearly and he should not think too much of Nong Sai. Hearing this from this mother constantly , Pada made the decision to end it with Nong Sai and get back with Chomphilai after she tells him that she is pregnant with his child.

With Nong Sai, when she learned that Pada was once married to Chomphilai and they divorced because of her, she was devastated and asked Pada for a divorce to which he agreed.

After the divorce, Nong Sai moved back to her house at the farm. She agreed to marry Smith Kanjonrat to forget about Pada.

Soon after, Pada breaks up with Chomphilai when he learned that she had a sexual affair with her ex-boyfriend Boontheert. Chomphilai blamed her break up with Pada on Nong Sai instead of herself and ordered her brother Chalermchai to kill Nong Sai. When Pada learned of their plans, he goes to find Nong Sai to save her, to protect her.