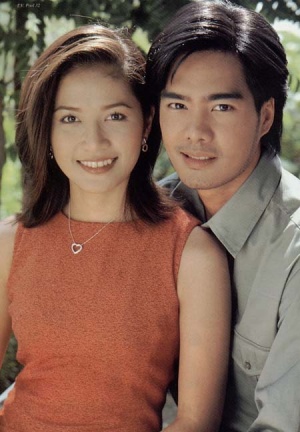 I don't remember how he chose Numfon but he saw her and she had this mouth that always said what she believed and she thought that he was nuts for doing this. I think that he put an ad in the papers looking for a maid. She needed money so she applied for the position. He told her about his plans and at first she was not sure about lying to elders but she needed the money so she agreed

When his mother came she fell in love with Numfon and thought that she was the perfect wife for Kelly. But his mother had already chosen this women for Kelly. They were coming over so that Kelly can take a look at his future wife but he announced that he was already married causing the family to be disappointed with his mother.

Numfon started to become the perfect wife and Kelly saw it and he didn't want to let her go but he had to act as if he didn't care. Numfon somewhat started to be interested in Kelly but she knew that he could not be faithful cause he was a player. There were several girls lined up just to be with him. Numfon knew that it was time for her to go and she packed.

When his mother found out she couldn't handle the news so she went into shock and nearly had a heart attack. Kelly and Jay begged Numfon to stay only until their mother was better. the mother was hospitalized a couple days and Numfon was there by her side. But Numfon knew that she had to leave soon. Jay also found out that his mother had faked the heart attack so that Numfon would stay. He also found out that his mother knew all along that Kelly and Numfon weren't really married. Jay went along with his mother's plan so that his brother would be happy.

Numfon ended up leaving and Kelly tried to find her everywhere. She was staying with friends in the country somewhere. He finally found her and pretended to drown [i think] and she rushed to him. He sat up and she got mad and tried to leave but he followed her and told her how he felt. He asked her 'If I love you a little bit how much will you charge[Ruk Nid Nid Kid Tow Rai]'