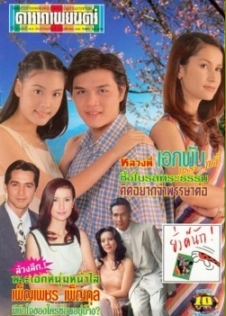 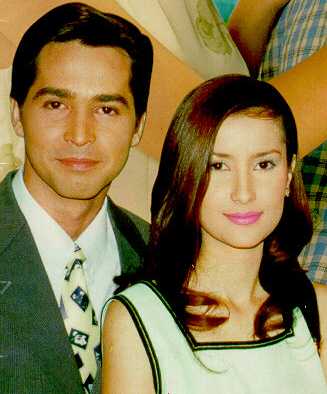 I love this drama, Ann is so young and beautiful in this lakorn, she play as a modle in here. And the story is good too, revenge type lakorn. I think this one and Jaosao Prissana is one of the best thai lakorn ever. Ann acting is just amazing, a very talented actress.

Pak and Methinee has known one another since childhood. When they grew up they fell in love. But Pak's mom wanted to keep them apart. So she sent Pak to continue his studies in America. He gave Methinee a rose plant to keep in place of him and these roses are rare. I think they are a blue rose plant. While Pak was away in America his mom came to Methinee and ordered her to stop seeing Pak. Methinee's mom who was never approved by Pak's mom as relation to her family is extremely hurt by this and orders and forces Methinee to write a letter to Pak stating that she wanted to break up. Pak was tremendously hurt by this and got drunk and had a car accident. When Methinee was informed that Pak had died she was overwhelmed by grief and Ann become a drinker to relief the grief. She knew that he died because of her letter.

Many years had passed and Methinee has become a well-known model. She has always stayed true to Pak because he was and is the one that she loves most. She kept everything about him. Though there was another man that she was also close to (played by Off Pongpat). She trusted him. They went out together often. But he had a wife and kid already. His wife is a busy business women and is also relate to Pak in some way. Methinee bump into man that looked exactly like Pak. His name was Pongsithon and he told Ann that he was a very friend to Pak. What she doesn't know is that he is Pak, the man that she loved. He can in revenge he wanted her to suffer the heart break like he suffered. He changed his identity and his family background (his adopted Jeb and his sister to be his family). Methinee was also teaching a class to young women that wanted to learn how to become a model. And Pongsithon's sister was also in this class.

To make this long story short he always did things to make her feel guilty about Pak. She always told him that she knew that it was her fault. He wanted to know why she did it but she always told him to go ask Pak's mother. Through out this lakorn he tries to win her over. She always tries to stay away from him. He although always had things that Pak would have. She always suspected things about this new Pongsithon.

Meanwhile her mom is in debt and is being blackmailed by them to have Methinee become their bosses new wife. Methinee refused until she had enough but Pongsithon stopped her before she could do anything. He took her to the house that they grew up in and showed her all the letters that she sent to Pak. She read everyone of them and in the morning they talked some more. He asked her to marry him after they recited this poem that only she and Pak would know. So she knew that he was Pak and not Pongsithon as he said. Therefore she said “Yes” cause she knew this was her Pak. He did not know that she knew the truth. He thought that she was not being faithful to Pak as she said cause she agreed to marry him. So on their wedding day he stood her up. She was upset and she went to the house that they grew up in and sure enough she found him. She told him the truth that she knew because she had asked Pak not to tell their secret poem to anyone. So if he was not Pak he would not know the poem. She explained that she agreed to Pak not Pongsithon and told him that now she really knew that Pak and Methinee were really over and walked off.

She disappeared awhile and when she was found she was very fragile and she needed to stay in the hospital for awhile. He went to see her but she wouldn't let him near her. One night she went out and got drunk and he took her back to the hospital and changed her into clean clothes and kissed her forehead as Off came in and saw and thought that they did something. So on the day of her sister's (Janie) engagement to Pongsithon's brother(Jeb) he revealed it to her and she denied it.

They all wanted Methinee to stop thinking about everything was was going on in her life so they took her to this beach house. They all relaxed there but Pongsithon followed her there wanting to tell her that he never stopped loving her and just was in a stage of hurting. She wouldn't talk to him. Everyone else soften to him and wanted her to forgive him so they helped him. One day he kept following her around and they ended up at the beach and he ripped her final letter to him the one that said that she wanted to break up with him. He told her the truth that nothing happened the night that she was drunk and he took her to the hospital and she started to sock him but he hugged her. He told her that when their worries were gone they would see a string of rainbow and sure enough when they were hugging a string of rainbow appeared before them. The End

Give your own synopsis or get it from somewhere.

If you get it from someone/some site/somewhere MAKE SURE YOU GIVE CREDIT. Very important.