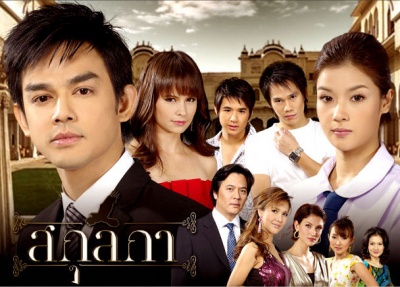 Mos is a rich man who comes from a long line of aristocrats. At first, he liked View and found her to be a virtuous girl. His nephew played by New Chaipon also has a thing for her. When Mos learns that Vill’s aunt/biological mother is a prostitute he tries to distance himself from Vill and also tries to sever his nephew’s relationship with her. Breaking up New and Vill’s relationship proves to be difficult because New is absolutely infatuated with Vill. The main plot of the story involves Mos trying to suppress his feelings for Vill and also trying to make everyone in his family shun her. In the end, he learns that just because her mother is a prostitute, it doesn’t necessary mean she is a horrible person, circumstances made her participate in this line of work.

Ann Alisha is nang’rai in this lakorn and also Mos’s girlfriend.

“Duang” a maid in a rich family, the Kanjanaroj, had a secret affairs with “Rat”, a beloved heir of this noble family. Later on she got pregnant and came along all the trouble. So she decided to escape to live poorly with her sister, “Suda” in slum area.

“Dow”, Duang’s only daughter, was born unhealthily, so Duang had to earn her living as a prostitute to make an amount of money to afford Dow for a famed lofty school. Still, as Duang ashamed of her career, she asked Suda to adopt Dow as her real daughter.

When Dow is grown up, she has a very close friend named “Pom”. Pom introduced Dow to his older brother, Poo. Poo is suddenly falling for her at first sight. Pom and Poo have a young uncle called “Uncle Nong”. He first met Dow while going to meet Pom and Poo at school and got a good feeling for Dow’s simple and innocent character. Both get along so well gradually by knowing nothing about each other’s background. One day Uncle Nong misunderstands Dow for some reasons, he then turns cold to her ever since. Dow is sad of the changing reaction of Uncle Nong.

At present, Rat is an excellent president of Ministry of Foreign Affairs. He married with “Walai” but have no children. When they meet Dow, they have a good impression and really want to be her patron. Dow has to accept their patronage and moves in. “Wadee”, a niece of Walai, is in love with Uncle Nong so that she hates Dow and feels jealous when she know that Uncle Nong likes Dow.

After Dow has been through all the good and bad things in life, she just realizes that the only man she always has in mind is not Poo, a guy who is full of romance and charm, but Uncle Nong who is full of cold feeling, plus expresses indifference to her constantly. Nevertheless, deep down inside, Dow can feel the love and goodwill of him giving to her all the time.