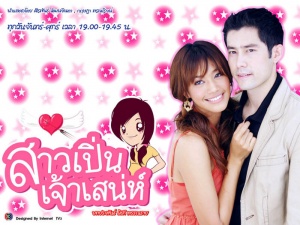 Noon is a simple, sweet, and often accident prone girl. She often dreams of getting married (in various wedding costumes), but can never really see her groom's face. With her bright and helpful personality, she is invited to train as staff in an upscale hotel. On the day she is go to, she and Mart run into a little homeless girl who is trying to sell them miscellaneous items. The little girl gets hit by a car, and Noon and Mart rush her to the hospital. Though they are in an emergency situation, they have an instant attraction for each other.

Noon is late for her training and is turned away. Witnessing this, Mart, who happens to be the hotel owner, helps pull some strings and gets Noon her job. The two often "accidently" meet and become good friends, each with a growing crush on the other. They are futher connected when they adopt the little homeless girl. She makes Noon her mom and Mart her dad. However, Mart does not reveal to Noon that he owns the hotel.

Meanwhile, a member on the hotel board has plans to compete and ruin Mart's hotel. He enlists the help of his son. The son plots trouble for the hotel and has Mart kidnapped, but each time Noon is involved and somehow always finds a way to help Mart. Further getting in the way of Mart and Noon's budding romance is Mart's business partner, who likes Noon too, and ask Mart to help him pursue her. Events turn for the worst when Noon's cousin gets involved with the hotel board member's son. He uses her to unknowingly make a drug drop. She loses the drugs and now owes the son money. To pay off the bad guy, Noon must now marry Mart's business partner who is willing to give her the money. And so, it's left up to Mart and Noon's adoptive daughter to undo all the damage and bring the two together.