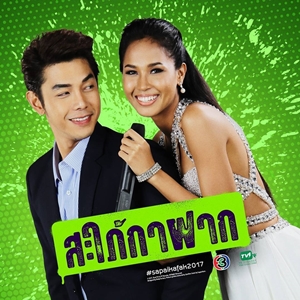 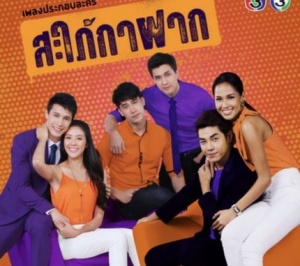 There are many obstacles that pushed the hearts of people to prove love for one another, regardless of how different two people can be. Kwanjit is a singer in a restaurant, she meets Robert a volunteer doctor from America. The two falls in love and Kwan Jit falls pregnant. Robert wants to take his family with him to America, but leaves first to deal with paperwork. Kwanjit waits for Robert’s return, but alas, he never returns. Kwanjit is heavily ridiculed by the people of her town. She decides to take her child and face life in Bangkok. Twenty years go by and Rainie, a young girl with curly hair and dark skin, grows up in a flat amongst the sound of mortars and pestles. Kwanjit has moved to this flat and people in the flat often mock Rainie’s dark skin. Especially, Dutdao the daughter of Duen Dayn, who is the owner of a beauty salon within the Flat. Dutdao often picks on Rainie.

Once Rainie finishes high school she becomes a delivery girl for her mother’s papaya salad business. Rainie, like most girls her age enjoy social media and pining towards handsome celebrities. One celebrity that Rainie is particularly fond of is a Trai Kun hi-so heir of Siam Advertising. She follows him on both Instagram and Facebook, Dutdao is also fond of him. Dutdao often picks on and mocks Trai Kun’s girlfriend, a beautiful leading actress. Rainie, is the opposite and admires Marayat or May because she thinks she is beautiful.

One day, while delivering food, Rainie meets Peter. Peter is a handsome America man, the owner of a makeup brand. Peter accidentally leaves his cellphone on a taxi that just pulled away, Rainie uses her bike to help Peter catch up to the Taxi. However, before Peter could thank her, Rainie left to continue her delivery.

Rainie’s delivery is at Angel Pub. Rainie sees Nannie practice singing and really likes it. She begins to sing along and dance along. Charlie, the owner of the pub joked with Rainie, asking if she wanted to change her career. Rainie decides to apply to be a singer, and Charly and Nannie agree. Rainie goes home to ask for her permission from her mother, but her mother refuses. However, she softens up, but warns Rainie to take good care of herself and never trust anyone, especially foreigners.

Trai Kun argues with his grandfather over the business and clients. Trai Kun is unable to continue arguing when his grandfather brings up an incident that involves competitor Giant Advertising, who were able to release superior concept for their clients, and thus, causing Trai Kun’s client to become upset with him. This issue would cause Siam, Trai Kun’s grandfather, to tell Trai Kun to end his relationship with May and marry Risa.

While singing, Rainie sees Trai Kun drinking. When the pub closes, she goes to see if Trai Kun is still there. There is a drunk foreigner who attempts to sexually assault her and Rainie removes her high heel and attempts to hit the foreigner, but accidentally hits Trai Kun. Trai Kun begins to bleed, and Rainie attempts to mend his injuries while apologizing. Trai Kun, angry, insults her by claiming she was attempting to seduce men to get clients. Rainie becomes upset and insults Trai Kun in return. Trai Kun, then has an idea. The next day Rainie goes to Siam Advertising and Trai Kun announces that she is his girlfriend. Siam is suspicious and asks to speak to Rainie alone. He figures out that it is Trai Kun’s plan, and attempts to pull the rug from under his grandson. He offers Rainie money, to ruin the relationship between Trai Kun and May. Rainie is upset and insults Siam for attempting to hire her to do something bad.

Kwanjit is involved in a bad accident and must have surgery immediately. Rainie has no choice, but to let doctors do the surgery. However, money is a big obstacle for Rainie. Rainie sees the business card that Siam gave her and decides she has to see him. She goes to see him and he agrees to help pay for her mother’s surgery, and give her another sum of money, if she is able to break May and Trai Kun up. Rainie is hesitant, but she has no choice, her mother’s life must come first. Siam will let Rainie work as Trai Kun’s secretary, and she must do what she can to break Trai Kun and Rainie up. Rainie feels sorry for May because she is picked on in lakorns and real life. Siam sends Rainie to an event with Trai Kun, an event that May begged Trai Kun to attend because there would be numerous of reporters there. Reporters are surprised when they see Trai Kun show up with Rainie. May is angry and begins mocking Rainie for the color of her skin. Rainie, retaliates by acting sweet with Trai Kun. The next day, Reporters write that Trai Kun imported a foreign girlfriend, and this upsets May. May tells her close friend Jay Nee to find out who Rainie is, immediately.

May is very upset and attempts to expose Rainie. With her best friend Nada, the two plan a party. When Rainie appears at the party, there are photos of her singing in a pub on every screen around. Rainie isn’t ashamed because that is really where she works. She goes on stage and performs, showing her talent. Everyone, including, Trai Kun is amazed by her voice. May becomes angry that she is unable to embarrass Rainie, and she is upset that Trai Kun won’t do anything to help her, and on top of that is nice to Rainie.

May begins to pull away from Trai Kun and Smartcha uses this opportunity to tell her that he will make her an international superstar. May eventually goes far with Smartcha and she attempts to get close to Peter so she could use him. However, Peter knows of her plan and backs away from her.

Smartcha and May devises a plan to steal Trai Kun’s work, and the plan is successful. Trai Kun believes that it is Rainie who messed up. Smartcha is so in love with May, and he doesn’t go home many nights. News of Smartcha and May reaches the ears of Suda, who is the wife of Smartcha. Rainie meets Suda on accidentally, when she helps Suda, when Suda was going to faint. Suda tells Rainie about everything, and Rainie enlists the help of Dutdao in finding the truth. Dutdao successfully gets pictures of May and Smartcha, on top of that, she does more than her mission, and releases the photos online. Rainie goes to visit Suda. Suda sees the photos and becomes an angry wife. She goes to May’s lakorn set and begins violently attacking May. She announces to reporters that if May does not stop messing with her husband, next time it would be acid. Trai Kun who sees the reports of May becomes suspicious and goes to view surveillance cameras. He finds that it is May who betrayed him, and feels bad for misunderstanding Rainie.

Rainie goes to audition for an advertisement due to Peter’s begging. Rainie gets the job and must pair with Trai Kun. The two does well and the advertisement comes out wonderful. However, during the filming, May burst in and attempted to hurt Rainie. She used a prop to hit Rainie, but Trai Kun blocked it and was injured. Rainie decides to back away from Trai Kun because of Siam’s words, that Risa was more suitable for him. The advertisement becomes a hit and the two becomes the new Koojin of the industry. Peter’s friend tells Rainie she should go audition for an international singing competition. Trai Kun attempts to express his feelings, but Rainie does not react, and Trai Kun becomes upset. Anna, who is the sister of Robert comes to Thailand with their family lawyer. She explains that after Robert returned to America, he was in an accident and died. She has been searching for Rainie ever since. She wants to take Rainie to America with her, and Kwanjit tells Rainie she should decide on her own. Kwanjit decides she will return to her hometown and buy back the land that was scammed from her. Rainie does not make a decision and asks to see someone, first.

Rainie goes to see Trai Kun, but Siam refuses. Trai Kun sneaks out to see Rainie, and confesses his love for her. Rainie is happy and tries to confess her feelings for him, but Risa comes out. Risa asks Rainie about the 10 million baht that she received from Siam. Rainie is unable to say anything, and Risa explains that the money was payment to Rainie, for help breaking Trai Kun and May up. Trai Kun is angry and believes that Rainie did everything for money. How will the story between Trai Kun and Rainie end?