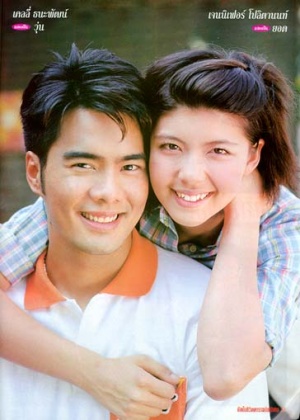 Yod lives with her mother in the country. Vin has a house in the country where she lives. He goes there to get away from the chaos of the city. In a will from his grandfather states that he had to marry one of the daughters from another family that his grandfather chose or he would not get a dime. So the pressure is on him to choose a girl. The girls in the family also both love Vin

Yod is a tom boy and everyone is her town is afraid of her. The only person that she listens to is her mother and grandmother. She meets Vin when he is on his way to his house in the country. They were in a car accident. She has him fix her car. They meet again when he kills her prized fighting chicken and she has him work off his debt. She works on a lemon picking farm and she makes him do his days work without any food.

Her mother and grandmother connect with Vinand they help Vin. Vin starts to fall for Yod and Yod is as hard as ever on him. though he helps her though many situations. his father and the family of the girls that he has to choose from finds out where he is and they follow him there and bring him back home.

The dad of the girl's that he has to choose from turns out to be Yod's father also. So he takes Yod to the city with him. Vin is thrilled that she is there. One day Yod gets kidnapped and Vin is there to save her and that when they both realize their love for one another. He asks her to marry him and she agrees. They get the blessing of their parents.

On their wedding day Yod is informed about the will rules and thinks that Vin is only marrying her so that he will get what's in the will. Vin does not realize why Yod is mad at him. But they pretend to be a happy couple when they are around their parents. One night he was so mad at her that he forced her into bed with him the next morning she is furious.

Meanwhile one of the girls that is Yod's sister wants Vin to be hers and so she drugs him into bed with her and everyone comes in and finds out what Vin is up to and Yod leaves. Vin is forced to take responsibility to marry the girl. He does take responsibility. Though they find out that it's a lie. He also finds out that Yod is pregnant and rushes to her. But she never forgives him. Until he pretends to be run over and she panics and confesses her feelings to him and he sits up and she blushes. There were also these bad people[I think her step-mother] is after Yod and tries to get rid of her. they chase her and she gets closer but someone was there to save her. in the end everyone is there on Yod’s little farm and they are all happy.