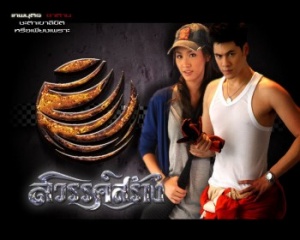 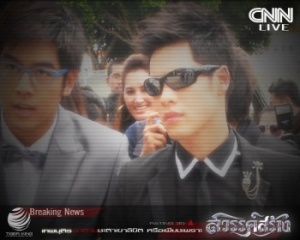 The story centers around Narop Payakracha (Cee Siwat), a cruel man, a man who cares for no one but himself. Narop is a super genius who became president of a large company called “Tiger King” by the age of 25. He lacks a heart but does well in business.

Eau (Ratipong Phumalee) is a security guard who works at Tiger King. Eau is a good man, a good father, a good brother and son. He values his work and is devoted to Tiger King. Eau has a 10 year old son named Oh and his sister is Aoonjai (Min Pechaya)–a feisty young college student, who occasionally works as a hot dog girl at race tracks.

When Eau became partially disabled while rescuing people from a fire at Tiger King, Narop fires him because he has a dislike for weaklings.

After losing his job, Eau became suicidal. He has a family to raise and his mother is ill (she is handicapped). Because of his leg and what Narop had said to him, he decides to commit suicide by standing in front of Narop’s car during a race. Before the suicide attempt, Eau made a video confession:”I just found this out, Khun Narop. We value people differently. I value the heart of the person. You value what you can get out of them for your success and objective. You don’t have a heart. Inside,, you only care for success. Before I saw you as a hero, you were my goal, that I strived towards. But now I give up. Your level is too high for me and there is no reward waiting there, except loneliness. You will win anyways because you think you will always win. But no one wins forever. Possibly you might lose to a pathetic man like me. Losing is a good thing, it teaches us.”

Narop unintentionally hit Eau on the race track and his car flipped over. Both Eau and Narop were badly injured and were rushed to the hospital. Eau passed away. Narop suffered a head injury and was in a coma for a while, but he survived. After his accident, Narop partially lost his memory and his personality completely changed too. He was no longer cruel, no longer greedy, no longer ambitions. He turned into a laid-back kinda guy, goodhearted, and considerate of others. Nothing like what he was before. He wanted to get to know his servants, he didn’t shout at other as much. He didn’t care for the company or remembered how to operate it. This terrified his mother Khun Ying Nayika (Supreetha Khamnuansin), who raised him to fierce like a tiger.

After seeing her son interacting with the servants and wanting to get to know them, Khun Ying Nayika ordered Narop’s assistant Thong Thew (Note Watcharaboon Leesuwan) to change Narop to how he was before. She told Thong Thew: “My child is tiger! Not a dog who will move aside to let anyone pass by.”—eeee…his mum mum is scary.

As Narop is going against his mother and evolving into a better person, Aoonjai is coming after him to avenge her brother’s death. She is helped by the son of Tiger King’s rival company Phoenix. They have the dumbest company names ever. Things don’t go as plan because Narop is a different person now.