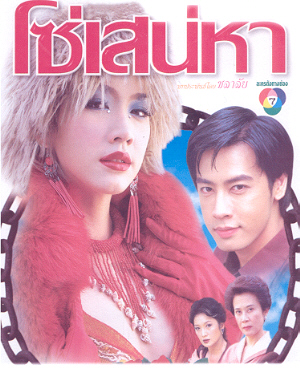 Pralee has just graduated. Graduating with her are her friends, San and Ta. San is in love with Pralee, but Ta likes San. Pralee returns home only to find her mother leaving to go out, with another man, a younger man, while her father is ill upstairs, so the two have a little argument. As they were arguing, her father tried to come downstairs, but along the way, he tripped and fell, and he died. Pralee is furious at her mom.

Rames’ brother, San, doesn’t live with them. It’s just Rames, his sister, Suakoon, and their mom, who’s handicapped. Rames and his sister do everything for their mom, and she loves them, especially Oil. But she has a very cruel heart.

After, Pralee’s dad’s funeral, her mom’s boyfriend moves in with them, against Pralee’s will. Pralee and her mom have many arguments and disagreements, so one day something happens and her mom kicks her out. As hurt as she is, Pralee moves out and stays with her friend, Ta.

Rames’ family company, I think, is like a modeling agency, so San decides to have Pralee model for them and she does. Her and Rames are kinda grouchy towards each other because Pralee had met Rames and his girlfriend at the mall and his girlfriend had wanted to buy the shirt that Aum got, so there was a little problem between them.

Rames’ mom decides that she wants a grandchild, so she has Suakoon write out an ad looking for someone. She decides that Rames will get a girl pregnant, just to have the baby, and then have nothing to do with that girl again, I think. And they will grant this woman 5 million dollars, I think. Rames doesn’t like this at all, but he does it for his mom because his mom will get him to feel guilty or something.

It was a party for their mom, so San dropped by the house, with Pralee. Somehow Pralee’s mom knows Rames’s mom, but his mom dislikes her mom. Pralee saw her mom there, as well as her boyfriend, so she just had to make a scene. They got into an argument, and her mom said that she will probably end up pregnant with a baby without a name. Pralee is furious at her mom, so I think she wants to get back at her mom, so I think she considers the ad.

Rames’ mom knows that Pralee will be applying, and she has Suakoon accept Pralee. I think she accepted Pralee because of something towards Pralee’s mom. I think she wants to get back at Pralee’s mom or something, so they accept Pralee. They have her get tests and stuff, just in case. Ta didn’t want Pralee to do this, but Pralee did it anyway. Suakoon gave Pralee the check for the money right away.

The next day before Pralee started her trip to the island with Rames, whom she didn’t know it was Rames, she dropped by her mom’s house with an envelope and left. When her mom, who at this time is sick, opened the envelope and saw what it was, was very worried and scared for her daughter. Cause you see, since Pralee’s been gone, her mom has been depressed and misses her very much, but Pralee doesn’t know that. And now her mom’s sick cause she misses her only child. Anther thing about Pralee’s mom is that her boyfriend, is cheating on her and only using her for her money.

When Pralee got to the island, she was alone, with a servant, who’s a pregnant dog. She talked to Pralee in a nasty tone, so Pralee treated her the same way. The next day, Rames arrived. Boy were they both shocked to see who the other was! Pralee decided she didn’t want to do this anymore and wanted to return to the city. She tried to get away by driving the boat back to the city, but was unsuccessful cause the boat died not even halfway, so Oil and the male servant had to go out and get her. She comes back but always tries to get away.

On the island, the two are not getting along at all. Pralee is somewhat cruel to Rames . They have to sleep in the same room and bed, so it complicates things for the two. The two servants watch their every moves cautiously, so the two are forced to stay in the same room together. They always have their arguments and never agree.

Meanwhile, back at home San and Ta are looking for Pralee. They search very hotel they can, just to find her. Ta has no other information as to whereas Pralee may be. One night, San and Ta come to a club cause San had wanted to and he gets drunk. Ta had to take him home and as she was putting him in bed, he called for Pralee and raped Ta. The next morning, she went home and I think her parents know about it. San tried to talk to her, but her parents no longer liked him anymore and he wasn’t welcomed at their house any longer.

Back on the island, Pralee and Rames have their disputes. One day, Pralee gets really mad and runs up to the mountain. Rames goes after her and something happens and Pralee slips and falls off the cliff, but Rames grabs her and saves her. Pralee starts to see that Rames is a good person. By helping her, Rames’ arm got a cut. Pralee tries to help him, but he is mad at her and refuses to let her help. From now on, Pralee is nice to Rames. She eats with him when it is time to eat and she talks to him in a nicer tone, so the two are starting to get along. They spend lots of time together. Just hanging out, canoeing, walks on the beach, dancing, and so on. They really enjoy each other now. They even start sleeping together.

Pralee’s mom is still sick and misses her daughter very much. There’s a doctor that comes to see her and he’s still young. Her boyfriend is always out, so one day, when he returns, she asks him where he went. They get into an argument and he starts to hit her, so she pulls the trigger on him and I think he dies. The doctor helps her, so I don’t think she got arrested.

Rames’ mom keeps in touch with the female servant to see how things are going on and, one day, the female servant tells her that it seems like the two are falling in love, which wasn’t part of his mom’s idea, so she calls Rames and talks to him. She asks Rames if he is in love with Pralee. He has a hard time answering her and tells her what she wants to hear. Pralee overhears this and is hurt. She’s back to being mad and stuff, so Rames asks what’s wrong and she tells him that she heard his conversation with his mother. He assures her that he loves her and she isn’t mad anymore.

Cause Rames hung up on her, his mom has Suakoon call Rames and tell him that their mom is in the hospital and he has to come back now. Suakoon does everything for her mom, but her mom is really cold-blooded towards her. She hits her and yells at her. Well, anyways, Suakoon calls Rames many times, but he doesn’t pick up cause he didn’t carry his cell phone. He’s out with Pralee. Well, the female servant does get to the phone and Suakoon gives her the message. She rushes to Rames and Pralee and tells them the news, and so Rames has to return to the city, leaving Pralee. Pralee is depressed that Rames has to return home, but before he goes, he tells her that he will be back and they will get married. They’ll forget everything in the contract and she’s the only one for him. And he leaves.

credit to Amy in Sarnworld