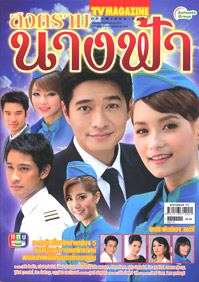 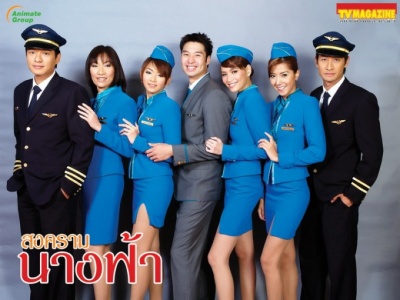 Rin, a beautiful new airhostess, is the star of the class, envied by all especially by Noi, a normal look air-hostess who scores the top of the class. Rin meets In, a senior pilot who falls in love with her at first sight and secretly sends her gifts. However, Rin’s friend Gib introduces her new boyfriend Ning, a handsome and playboy co-pilot, to Rin and friends. Ning also falls in love with Rin and tries to win her heart.

While in Singapore, Rin has the chance to meet In again and know that he is the one who sent her all the gifts. They have a good time together in many places in Singapore and Rin starts to fall in love with In. When they return to Thailand, In’s wife comes to harass Rin at the airport and In has to drag his wife away, leaving Rin embarrassed in the crowd but comforted by Ning, who secretly informed In’s wife of her and In’s relationship.

In tries to make Rin understand that he is going to divorce with his wife and wants Rin to wait for him. But Rin is very confused because she doesn’t want to snatch another woman’s husband, so she decides to go out with Ning. Ning uses his suave moves to trick Rin into sleeping with him. In and Ning get in a fight and Rin has to decide to choose Ning for morality’s sake, which makes In very sad.

Soon Rin gets pregnant and has to get married with Ning and moves into his house, where she meets his wicked mother and younger sister Noi, her archenemy. Moreover, Rin finds out that Ning has always been lying to her because he got married before and has a 10-year-old daughter with him. Soon he starts fooling around and having affair with Cherry, another air hostess. Rin wants to leave her husband because of his fooling around but cannot because she is having another baby with him.

After delivering her second baby, Rin gets in her good shape and goes back to work as airhostess and has a chance to meet In in Singapore again. He has already resigned from his career and divorced with his wife. Now Rin and In understand each other. He is so good to her and shows her that he cares for her by giving her a jade necklace. Rin is so impressed with him that she gives herself to him that night.

Ning, afraid of divorcing with Rin because he doesn’t want his career record to be tarnished when he can be promoted to be captain, tries to please Rin in every means, such as building her a new house as she requests, or buying her a new car. But Cherry is so jealous and begins to harass Rin both at work and at home. They get in a serious fight and Rin suffers a miscarriage.

She is so shocked to know that the dead child was born from her and In that she suffers a mental illness. She won’t speak to anyone. Ning tries to come to visit her at her mother’s house but Cherry forbids him, threatening to cut his “thing” off if he cheats on her. Rin is so depressed that she expresses her feelings through written words.

Until one day she finds in the drawer the jade necklace In gave her that she regains her senses and decides to file a divorce with Ning and to gain the ownership right of the house which is built by her money. However, Cherry wants the house so bad that she plots a plan with Ning, trying to accuse Rin of having an affair with In, so Rin could get divorced with Ning but leaving without the house. Ning agrees to the plan and plays along. However, Rin fights against all odds to prove her innocence and wins the case. Finally, she travels to Singapore to the places she used to go with In and meet him again accidentally in the end.