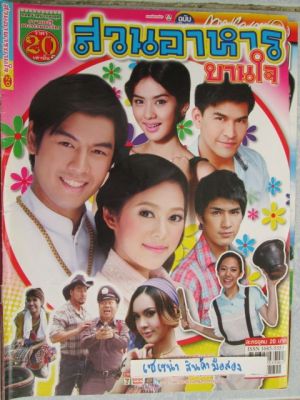 The story is about food. it's a comedy kokik cute genre lakorn take place in the country. about chaotic fun love story of miss "Baun Jai"(n'ek) who has a younger brother name "beuak" a dad name "hoi" and a garden restaurant that they unwilling want. "Baun jai" may just have an ordinary life, she's just a mechanic-fix all types of machines at the farm in the country. but then one day p'ek came and make her life chaotic and fun. he's kum-none, rich handsome guy, came from studied at america, many women is after him. his name is "bu root chart"--kumnone burootchart. the chaotic started at the garden restaurant. many characters in here is funny,like Baun jai's mom(pek),or khunnai-naiumpure and daughter(wanwell),aikui etc..

i'm glad this lakorn is from n'ek point of view. the title is about n'ek: suan aharn=garden restaurant, baun jai=n'ek name, put together baunjai's garden restaurant. cause Tubtim passed two lakorns that she's n'ek, the title is about p'ek. wonder what n'ek character will be like. from the summary, she's a mechanic so probably tomboyish. it's nice see Tubtim switch roles from playing evil character in arsoon noi nai takieng kaew, and now will get to see her play comedy again, which is good. so won't be boring and make people come back and love her play comedy again, cause many like her play comedy said she play so funny,cute and natural. this is a new role for her, a mechanic and own a restaurant. from p'ek character description. Natthew fit but sadly it isn't him. but between Note and Tle. Note fit the p'ek character more. hope Note is the p'ek, a new change is good sometimes. sick n'bore of Tubtim constant pairing up with Tle already. the same p'ek that i only want Tubtim to pair up with is Natthew,if not, then want to see her pair up with a new actor. From teedee at asianfuse.net

Give your own synopsis or get it from somewhere. If you get it from someone/some site/somewhere. MAKE SURE YOU GIVE CREDIT. Very important. If someone else want to give another review just write it under the other synopsis.