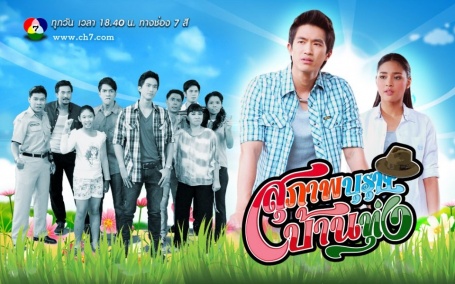 Hin (Pai) is the son of a former thug in a small village in rural Thailand. He’s a good guy and well respected in the community because he cares and gives out a lending hand to his neighbors when they are in need. Kaew (Pook Look) is the daughter of the mayor of their town. When they were kids, they were very close friends. When she went to study in Bangkok, their relationship turned sour and her impression of him changed because her older brother Jaeng had been telling her lies about Hin– on how Hin is now the thug of their town just like his father was. After not seeing each other for years, they meet again and Hin falls in love with Kaew because she has grown up to be a beautiful woman. Sadly she hates him because of the lies she heard from her older brother. As time progresses, Kaew begins to see Hin is not a bad guy. He’s actually a good guy trying to save the town from land developers. The land in their province is being brought up by Danu Properties and sold to foreigners. Credit: Lyn's Lakorn Blog [1]