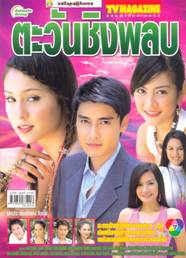 Noo Mook (Kwan) and Pooh (Kade) met at a park because they have similar hobbies. Both love birds and nature. After becoming friends with Pooh (Kade), he met her older sister, Jindara. Jin fell in love with Pooh and the love triangle starts. After knowing that her older sister, Jin love Pooh. Noo Mook decided to let Pooh go. Jin once told Pooh that Mook was in love with their employee, Chat and that made Pooh go on to Jin. Jin and Pooh decided that they wanted to go abroad to study and they went together leaving Noo Mook alone. Over sea, Jin and Pooh lived together like a married couple. Jin loved fashion therefore she was studying about fashion instead of going for her father's business. Pooh also studied in photography and his other hobbies. Mook who still lived with her parents helped her dad out for his ceramic business. Even though she does not say anything about her sister Jin and Pooh's relationship, in her heart. She is torn apart into pieces and secretly cried alone. No matter how much she tried to stop herself from having feelings for Pooh, she could not.