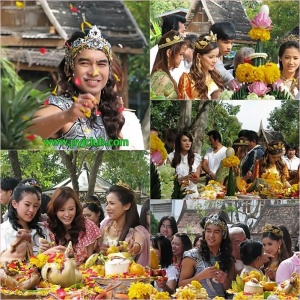 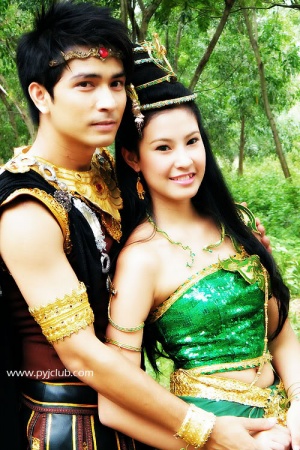 The god in heaven saw that humans were too selfish, evil, greedy etc... creating wars which many deaths came upon them so he planned to burn the whole world down and create newer humans. Before that, the god had four sashes including his which was the fifth one. He had to choose which gods/goddess were fit to protect each part of the world. His sash was a diamond sash which was more powerful than the other four. The first ruby sash was given to the Tep Satraa who guard underneath earth. The second sash of emerald was given to Tapi Yaang Roo who guard Nakhon Glan Hao (heaven). The third sash of money was given to Tep Gaan Waylaa who protected the surface of earth and the last sash of topaz was given to Tapi Garoon Na who guarded the underwater.

When the God was about to burn the whole world including heaven, he created a monster or asoon and told all the people of heaven to give their weapons including their sashes to the asoon so that he can guard it for them when the world is back. The God didn't know that the asoon had some evil plans which was to become the owner of all the weapons that were given to him. When humans, gods and goddesses were born. The world seemed quite better and when all the gods and goddesses went back to grab their weapons, the evil asoon wouldn't give it back to them which resulted some fight and they regain their weapons and the evil asoon ran away.

The God had to learn all the rules of heaven because when he burned the whole world, he also burn himself and when he was back, his memories were gone. Tep Satraa and Tapi Yaang Roo fell in love and had an affair. Later, she became pregnant and had a baby boy. It was against heaven to fall in love and have an affair and the God found out and gave them a punishment. Tep Satraa and Tapi Yaang Roo had to send their baby down to earth. Tep Satraa told the asoon to look after his kid and he gave his ruby sash to the baby so that it can guard him. Not knowing that the asoon had evil plans behind it he thought that since he was much more powerful than the asoon. The asoon would following his rules. A king and a queen didn't have a kid so they found the baby and decided to raise him. Many days after, the queen became pregnant and had a baby boy who they named Sangsuri.

Five to six years later, Maneedaeng became evil like his "dad" (asoon) because the asoon said that he was Maneedaeng's father and that Maneedaeng didn't have other parents. Maneedaeng hated Sangsuri which Sangsuri was completely opposite of him. Sangsuri was a nice and cheerful boy who wouldn't do anything wrong. Maneedaeng tried to kill Sangsuri so his parents took him to live with a wizard far away from their kingdom so that Sangsuri wouldn't get killed. Living with the wizard, Sangsuri was taught kungfu etc... and there, he met a girl named Naki. Naki was a paya nak (a dragon) who came on land to play. She and Sangsuri became best friends. The God gave his diamond sash to Naki and he told Naki to protect it until she meets someone whose good enough to become the owner of the diamond sash.

Asoon came all the way down to the underwater and tried to destroy all the dragons. But with the help of Tapi Garoon Na they were able to survive and Asoon thought that he had destroyed all of them. Naki and Sangsuri were separated until they grew up as adults. Naki went "outside" to visit the human world and she met Sangsuri who doesn't recognize her because she's hiding her identity by wearing a black cloth to cover her face. Naki fell in love with Sangsuri and he doesn't know. Sangsuri fell in love with Rattanawadee without knowing that he's hurting Naki's feelings.

Maneedaeng became 100% evil just like his "dad" because he drank asoon's blood and became half god and half asoon. He also took over Rattanawadee's kingdom. Tapi Yaang Roo and Tep Satraa tried to convince that they were Maneedaengs's parents but he doesn't believe in them and he only belive his "dad" (asoon). Maneedaeng fell in love with Rattanawadee and made her his wife. Rattanawadee didn't love Maneedaeng and hated him down to her guts. Maneedaeng then "R" her while she tried to get away, but his actions was a success.

Will Maneedaeng believe that Tep Satraa and Tapi Yaang Roo are his parents? Is Sangsuri able to find his parents? Will Rattanawadee love Maneedaeng back? Will the Asoon be able to get a hand on all the five sashes? Will Sangsuri know that Naki loves him? Will their love survive.....?