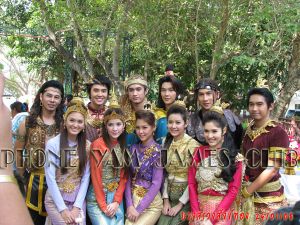 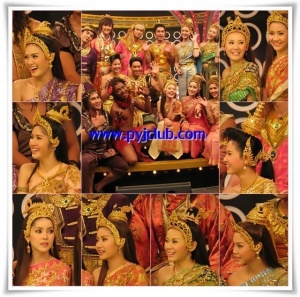 In the story sung tong is about this couple who are the king and queen. They ruled a country and they wanted a son to come and govern their country. But instead the queen Juntayvee(Namthip) gave birth to a shell not a son. The king was mad but still loved his first wife. But the second wife, Junta(Dear) convinced him about the shell. So the king kicked Juntayvee and her shell out of the palace. Sad and so the second wife was also pregnant, she was hoping to give birth to a son so that the king would be happy, but the second wife also gave birth to a girl. The girl was named Juntee(Yaibua). Juntayvee went and lived with an aunt and uncle out in the forest. She didn't die either way, at first Junta ordered the soldiers to kill Juntayvee but they couldn't so she is still alive... 5 years later.

Junatayvee found out that the shell was her son; well her son came out of the shell so destroyed the shell so Pra Sung couldn't go back into the shell. Junta, who is now queen, heard these rumours and sent soldiers to kill the son. But, no matter how hard they tried they couldn't...

Sung Tong/Pra Sung(Gino/Nott) got seperated by his mother cause he got caught by the soldiers. the soldiers threw him into the sea but he was saved by a Dragon king who had a son who was jealous of Sung Tong. So the Dragon King sent him away on a ship but a Giantress saw him and wanted him as a son, so she drew the ship back and made him stay with her as her son. She loved Sung Tong a lot but he only wanted his mother, so he kept trying to go find his mother Juntaywee but the giantress kept finding him. So he decided to stay and grew up. Finally when he grew up, he decided to run off, but the giantress found him and cried and cried and died. He finally moved on and turned himself into the Rambutam with the black mask. He came to a kingdom of where there were 7 princesses who were to be wedded. All the princesses threw their Poomalais and got husbands except the Youngest, Rotjina(Mild). Finally the king decide to bring the ugliest person they could find and brought Sung Tong. Rotjina came out and saw Sung Tong, but Sung Tong only reaveal his real self to her. Everybody else didn't see what she saw and she threw him the Poomalai. Throughout the series, he gets bully by the brother in laws and later on reaveals his real identity when Ong In came down and challenged him to a game....