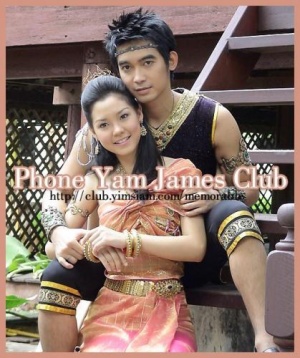 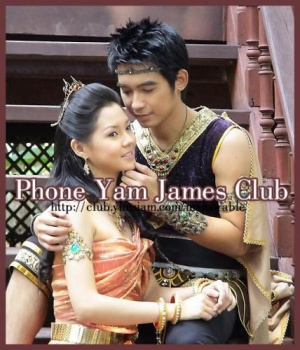 From Mai09 from Thai Boran Forum

Basic storyline, a magical flute, that Nang Ek plays, but whoever known to play the flute will die. Then there's Pra Ek's flute, not sure if it's the same but yea. Then Nang Ek was a Nang fah in heaven, name Tepsamari, and reborned to Tipmonta. Pra In loved her, so he promised her that she can make 3 wishes and he'll grant it to her whenever she needs it...

Story starts out with the Kingdom of Rathananakorn, where PraTinawong lives. There's a nyacnt (giant) who goes around eating people and civillians so the king sends out his son, PraTinawong out, since he has a magical sword, Dab Fab Leum. PraTinawong decides to go out to get rid of the giant. He gets rid of the Giant, but the Giant wants revenge so he kept transforming into girls and trick PraTinawong and tried killing him but PraTinawong doesn't die b/c he has this magical ring that keeps him a live. So he keeps winning the Giant so the Giant finally runs off. Then PraTinawog comes to the Kingdom of Poom Sallee.

And I think, being tricked so many times by the Giant as girls, he decides to transform himself into a bum call "Ngo Ngoi" to see if there will be any nice princess. All of the princesses there were mean except for the youngest one, Tipmonta. Tipmonta was nice to him, but Tipmonta's father didn't like it, so he made soldiers beated up Ngo Ngoi and tied him up. Ngo Ngoi died b/c the sisters gave him some poisioned water, but Tipmonta prayed to Pra In, making her first wish, for Ngo Ngoi not to di. Pra In transformed into a Tyrant and came to Poom Sallee and was threatening to take over, and made Ngo Ngoi alived again. Pra In fought with Tipmonta's father and was going to take over, but Ngo Ngoi stepped up and transformed back into PraTinawong. After letting PraTinawong win, Pra In fled. PraTinawong then was bethrothed to Tipmonta, so he promises that he'll love her and her only, and he gave Tipmonta his magical ring. But then Tipmonta's jealous sisters tricked her. They told her to do things to harm him and that if he really loves her, then he wouldn't get angry. So Tipmonta, being only a child, not knowing right from wrong, does what they tell her to do. First she pushes him down a cliff, causing his head to bleed, then she burns his face with boiling hot water, and last, she stabs him. He forgives her after when she pushes him down the cliff and when he burned his face, but after she stabbed him, he finally leaves her. She sneaks out and goes after him. Not being able to find him, she prays to Pra In again, using her 2nd wish, so Pra In helps her out once more, making twisters to block PraTinawong's path and leading him back to her. He doesn't believe that she found him and asks her how she found him. She told him that Thepvada helped her. He doesn't blelieve in Thepvada and ever since then goes against Pra In.

Tipmonta begs him to let her go with him but he wouldn't let her. He told her to go back but she wouldn't so he told her that if she wanted to go with him to his kingdom, she must be mute, and never talk, not even to him, but only when they're alone together, and she must wear a wig to be disguised as a boy so no one will know she's a girl. She willingly agrees and wears the wig.

They come back to his kingdom of Rathananakorn and PraTinawong lies that she's the amaat(official) of Poom Salee 's child he picked up and that her name is Joondee. Pra Ek's brother, Pommin saved her from drowning and that's how they met.

PraTinawong treats Tipmonta kinda badly throughout all the time she was there. Whenever he makes her sad, she gets depress and plays a magical flute. Later the Nang Rai, Guyawan came to their kingdom and wanted to marry PraTinawong, but PraTinawong wouldn't agree to it. So she poisioned herself, and he saved her, but taking the ring from Tipmonta and saving her. Then he gave Tipmonta back the ring, but then he married Guyawan. Whenever PraTinawong comes to stay with Tipmonta, Guyawan would come and cry to him and make him go with her back to her room.

Alot of things happens. Tipmonta grows up to her teens. Guyawan gets jealous of Choondee, not knowing she's a girl, but PraTinawong always seem to treat him/her nicely. Guyawan tells her guy servant, Sedoom, to kill Choondee couple of times but they fail b/c Pra In sent down a little Nang Fah Kapook to stay with Tipmonta b/c I think that was Tipmonta's 3rd wish, to have someone accompany her since PraTinawong sleeps with Guyawan all the time, and Pommin went away to redeem his sin of killing Seedoom's son by accident. Tipmonta grows into her teens and Pommin came back. Few times Guyawan also tries to take the magical ring that PraTinawong gave Tipmonta, but fails. And whenever PraTinawong uses it for something, he always returns it to her; such as the time when their kingdom were being attack by Seedoom in his deamon form and he shot out powers and Pommin pushed Tipmonta out of the way, Pratinawong used the ring and gave it back to her.

Tipmonta finally is a grown woman. PraTinawong and Pommin were to send Guyawan back to her kingdom, b/c she wanted to visit? But Pommin went only for awhile and came back. Kopook told Tipmonta to take off her wig so she did. Pommin goes to her room and finds out Choondee is a woman and she is the princess of Poom Sallee. Tinawong comes back and takes off her wig and sees her how beatiful she is. PraTinawong sneaks to her room and tries to show her that he still loves her, but Tipmonta doesn't want to really be with him anymore, since he's got a wife already. He takes her places. Sadly, the King decides for Tipmonta to be Pommin's wife instead. Then one night he goes to her, and since she's going to be Pommin's wife, she doesn't want to be with him anymore and since he already got Guyawan. PraTinawong then...uhum..sorta..raped her. Then yea they keep sneaking out and sleeping around places, then one night Pommin finds out and he hates PraTinawong ever since. The queen then decides that Tipmonta becomes PraTinawong's first wife instead, since she really was the first, so Tipmonta is PraTinawong's wife. He spends his time mostly with Tipmonta and Guyawan starts to get jealous.

Guyawan puts a spell on PraTinawong. Tipmonta, Junaporn, and Guyawan all gets pregnant. Tipmonta and Junaporn's child is Tinawong's child, but Guyawan's child, she had an affair with one of the guy giant servants so it's his kid. Tipmonta's child is a girl she named Gamlaimak and Ngorporn had a son, but he's giant like her, forgot his name, and Guyawan's Yak daughter is Guyawek. Then Guyawan makes her servants go to kill Tipmonta and Junaporn's child, but Pommin and Wantamalai fled with their child and found each other and brought the children up together. Wantamalai likes Pommin but he doesn't really accepts her and whenever they're together they'd always get into arguements. When they go back to the Rathananakorn, the Giant attacks once more, and Junaporn, running to her child, dies by getting power shot at her. Then Guywan blames that it was b/c of Pommin that Ngoporn died, and stupidly, the Guy servant giants believes her and goes try to kill Pommin but failed. Gamlaimak goes to Pratinawong wanting him to claim to be her father, but still on the spell, he treats Guyawek better and is mean to Tipmonta's daughter. A few more things happen and PraTinawong gets trapped in this one glob-like thing. Kapook tells Tipmonta that in order to free Tinawong and if she truly loves him, then she would help him with her flute. Tipmonta comes play her flute to PraTinawong. Tipmonta then dies and Tinawong gets free from the thing and finally is free of the spell. Guyawan then ran off and her face starts to rot from all the evil things she done. Pommin blames the death of Tipmonta on Pratinawong. Pra In then comes back down and, i think sorta made a bet with PraTinawong and then revived Tipmonta. She relives, but doesn't remember anyone or anything, only her father. Then her father comes and visit her, and she left with her father, not remembering PraTinawong. He follows her, but on his way, Pra In comes and turned him into Ngo Ngoi again, and made him mute and gave him his flute. (Karma - since he made Tipmonta mute)

Pra in then goes as a Prince, Ong Sakkrin, and goes to Poom Sallee. He kinda puts Tipmonta's father on a spell, so Tipmonta is to be engaged to him. While at Poom Sallee, Nang Fah Kapook and Nang Fah Chaidee, made Gamlaimak and Guyawek became friends. PraTinawong blows his flute, trying to make Tipmonta remember him. At first he fails b/c Pra In tries to make her remember her past of being Tipsamari instead, but he doesn't give up then finally at his last breath of playing the flute, she finally remembers him. Guyawan's brother gets killed and Guyawan dies, breaking the doll she used to cast a spell on PraTinawong, making him die too. PraTinawong goes to heaven and sees Guyawan, but she gets drag down to some...hell-looking like place and suffers there. Then Pra In goes to PraTinawong and tells him that he is dead, and if he truly loves Tipmonta, then he must lose to Pra in and kneel to him. PraTinawong kneels and is alive again. he hugs Tipmonta and his all his childeren. Then he goes to Pra In and kneels down once more, and everybody else kneels down to Pra In. Pra In and the Teps and Nang Fahs all goes back to heaven, watching all over them.

This boran, in my opinion, has a lot of good morals, and two main moral is being stuck up and thinking you're always right gets you nowhere, you've got to lose sometimes, like Pratinawong's disrespect for Pra in; and the main one, never take something forgranted like how PraTInawong took Tipmonta forgranted. In my opinion, this is a very great boran and it is worthy to wactch. The only bad part is they kinda drag but yea. loLXD besides that, everything is great!