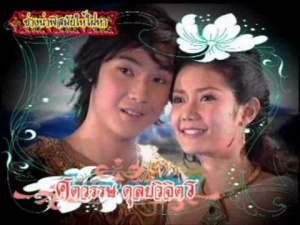 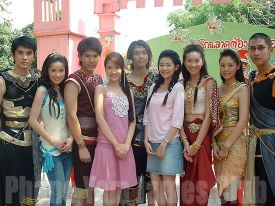 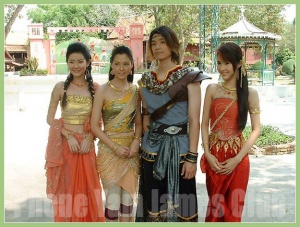 In the kingdom of Sogan, a prince named Phetdara left his kingdom when he was small. It all happened nne day, some people from China came to his palace and gave him some toys. It wasn't any ordinary toy at all, but they were magical toys. A boat and a monkey in a jar for the prince. The prince flew in his boat and went off. He met Bua Kaew and also the giant, Mek Pat who wants Bua Kaew Jak Krote. Phetdara lost his way back home so he stayed with pra laer si(wizard). The wizard taught him how to fight and all kinds of stuff. Many years later, it was time for Phetdara to return home, but on his way home. He was invited to another wizard's place to see if anyone is Bua Kaew's soul mate Mek Sit came too and most of the men being invited are scared of him. Later when she met her soul mate, Mek Sit stole her from Phetdara and she was taken to his palace in the sky called Palace Groong Glang Hao. In his kingdom, Bua Kaew met his wife, Upsornsuda who is a celestial from heaven given to Mek Sit for his loyalty to the god. Phetdara came to save his wife, and he later slept with Mek Sit's wife. (Upsornsuda's not literlly his wife because she doesn't let Mek Sit sleep with her) Phetdara's third wife is Kaew Kinaree who is half bird and human. Her mom is a kinaree and her dad is a giant(yak Mek Pat) who attacked Bua Kaew when she was small. Mek Sit hated Phetdara beause he has every girl that Mek Sit wants/have and so he made Kaewkinaree his wife even though it was Phetdara's wife already.(he rapedher while she was sleeping) Bua Kaew had been seperated from her parents when she was still a baby and she was supposed to find her mom so they can go back to her kingdom to regain her mother's position as a queen. All of Phetdara's wife had a child for him. Bua Kaew's child is a clever and tough girl named Bua Tong who doesn't like to be looked at as a weakling. Rasameejan on the other half is opposite of Bua Tong. She's nice and not as tough as Bua Tong and so her friend, Pintong protects her from all danger. She is the daughter of Kaewkinaree. Her daughter is the youngest of three kids. Phetrasi who is the oldest and only son of Phetdara and Upsornsuda who is a fighter and naughty just like his father. Kaewkinaree died at the end because she saved her husband from being killed. Upsornsuda returned Groong Glang Hao and so Phetdara is left with his only wife, Bua Kaew. Bua Kaew had to look over Phetrasi and Rasameejan because their parents are gone. Bua Kaew Jak Krot is remake of Bua Kaew Bua Tong(the old version)

Not the best summary, left out a lot of parts, but enjoy!