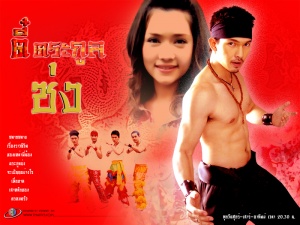 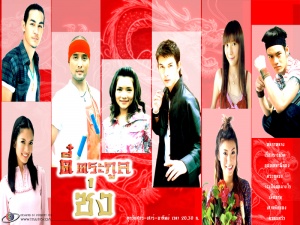 Ahhhh, this lakorn was so hard to watch since Ateam was in this and they weren't together..........ok back to synopsis A poor Chinese family, the Song family that lived in Yaowarat gave up their youngest son, Chai. To a family friend, who wasn't able to conceive child, they wanted a child to run their family business. The song family later was faced with many problems, their oldest son Ah-Yong died and the dad got so angry at himself that he drank everyday and caused himself to get hit by a car and passed away. The mother was pregnant at the time and became very angry. 17 years pass and Chai has grown up to be (a hottie). Chai is very irresponsible all he does is film movies and goes to bars, he's a playboy. His adopted father gets angry at him for messing up a very important meeting and slaps Chai. Chai then overhears his father say the truth about his adoption and plans to go to Thailand to find his birth parents. He then gets robbed and a taxi driver helps him. Chai then meets Mungchu and they argue. Meanwhile in the Song family they sell boiled rice porridge and Ming and Fuu always help make it, their youngest brother always fools around. One day Chai goes to a competition for "Mr.Chinatown" and Chai wins and gets the money. Leng gets jealous and plans to rob Chai, with the help of Fuu. So Fuu lures Chai to an empty alley and Leng hits Chai in the head and takes his money. They then take Chai to their home and find out that Chai has lost his memory. So then Chai works with the family and Leng gets jealous that his whole family loves Chai more then him. Time goes by and Chai manages to get pieces of his memory back and has fun taunting Mungchu cause he works at her family. One day at the constuction zone there Munglee was with a foreigner and he needed a pen so Chai was walking there and had a pen and Munglee notices that he has perfect english. So then Munglee discusses the possibilities of what Chai is, (screams Ateam are talking together in this scene). Chai realizes that he has stayed at the house for too long now and decides to leave, he comes back to save the family from getting beat up, so he ends up staying at the Song home again. Chai then gets his full memory back and remembers himself getting hit and he tells the Song family that Fuu lead him to the alley and the truth is revealed. Leng gets a yelling from his mom so he runs away. Chai then tells the family that he remembers his adopted parents and he gets the memory of him arguing with his parents so he tells the Song family and they ask for his parent's names so he tells them and they all realize that he is their long lost son. Chai finally finds his family, unfortunately Leng doesn't know that the guy he despises is his older brother. Leng then gets chased by bad guys and they shoot him but luckily Chai comes and uses himself as a shield. His adopted parents find Chai and the truth is fully opened. Mungchu and Chai end up together and Munglee ends up with Ming. The End