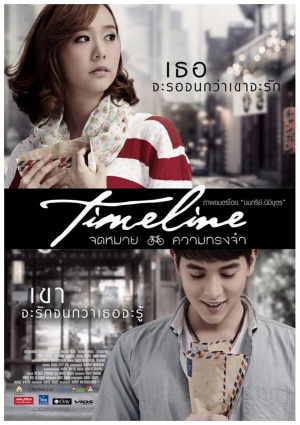 Timeline Letter Memory (Thai : Timeline จดหมาย ความทรงจำ) is romantic-comedy-drama Thai film created by Sahamongkol Film and this is a second episode of The Letter (2004 film). The film grossed 51.8 million baht.

Tan (James Jirayu Tangsrisuk) is a teenager who wanted to experience the outside world. He lives in Chiang Mai with his mother but he is bored with his life, therefore he determines to study in Bangkok.

Life in the new world, with all new things around and different from the old world, causes "Tan" to meet "June"( Toey Jarinporn Joonkiat) a new friend that has a different way of thinking and looking at the world. She is the only who supports him carries and gives inspiration to him. But Tan is fall in love with June's sister, Orn June decides to further her study in Japan.

She can't accept it because Tan and her sister are the one that she loves. Later, Tan breaks up with Orn. Then, he writes a letter to June expressing his love. He knows that he loves her but it is too late. She dies after she gets the letter from Tan. By accident, she drowns when she tries to help a Japanese boy. Tan is broken hearted. He decides to do what June wanted to do, which is to travel around the world.