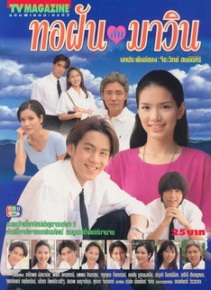 Marvin father is a very strict man and wants his son to follow in his foot-steps. Marvin on the other hand is really into the entertainment business. So he joins and acting class. that's where he meets Torfun. She too is in the class. They meet each other a few times and they talk. Mar-Vin even writes a song for her. There is a play coming up and they both audition and they both land the leading roles. He takes this opportunity to gets closer to her. He sometimes goes to her house using the excuse that he needs help practicing his lines. When it got nearer to the day of the opening of the play he told his dad and his dad forbid him to be in it. He didn't listen to his dad and performed anyway and his dad was disappointed. I think that it was his condition or was it that he fell of the stairs well anyway he ended up in the hospital and I think he lost his memory. It was either that or he was in a coma. Anyway the way that they got him to himself again was that she sang the song that he wrote for her. In the end they graduated and he was going to continue his studies elsewhere and told her that he would return and for her to wait for him.