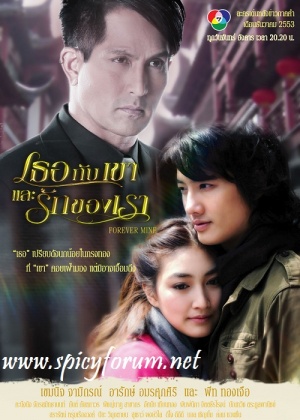 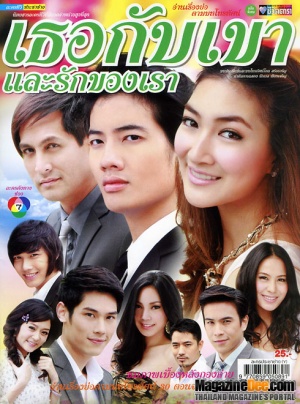 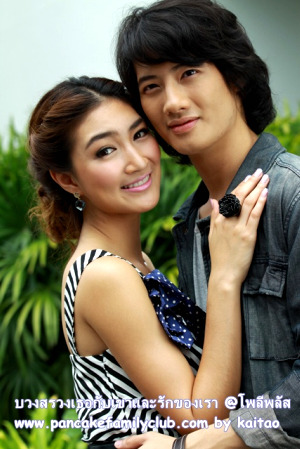 Ever since her parents passed away, Pangrum [Pancake Khemanit] has lost all her fortune. Her uncle and aunt helped raised her but when they couldn’t do it anymore, they send her off to live with Khun Yai, a handsome, wealthy man [Pete Thongjeur], making him her guardian. Khun Yai paid the uncle and aunt a large amount of money and promise he’ll take care of Pangrum. People then started talking and made Pangrum look like she was the “little bird in the golden cage” for Khun Yai. This made Ganda [Poo Sararat], Khun Yai’s aunt very unhappy, scared that Pangrum might steal all of their fortune so she came up with a plan to set Sajee [May Pichanart] up with her nephew. But Khun Yai thinks of Sajee as a “one happy-time thing” because his heart belongs to Pangrum, but the thing was he was her guardian and her age is the same age as his little sister, Khun Ying [Rotmay Kaneungnit], so it wouldn’t look right. To add another thing, his self-centered little brother, Khun Lek [Zugus Bunthawit] always likes Pangrum.

Since his parents death, Khun Yai had to take over the family company and had ask Thanope [Bon Asanai], his right hand man to come help out with the company. This made Khun Lek unhappy because he thinks Khun Yai doesn’t trust his own brother. Chanont [Kan Kantathavorn], an ex-boyfriend of Khun Ying and a close friend of Khun Lek came to help out with the company too. As for the life of the “little bird in the golden cage”, Pangrum is isn’t happy with the way Khun Yai is treating her, taking her out to meet people in the high society. She wants to be free and is tired of Ganda and Sajee. But luckily she has the housekeeper Rabieb [Patai-Deejai] as her advisor, telling Pangrum to stay strong because no matter what, Khun Yai will never leave Pangrum. Even when Khun Yai had a meeting in Shang Hai, he took Pangrum to go with him and when Ganda heard about this, she told Sajee to follow them there.

In Shang Hai, Khun Yai had so many meetings and having Sajee stick to him like a glue, Pangrum couldn’t be with him so she felt lonely. She went walking and almost got hit by a car but lucky enough Pao [Pae Arak], a Thai citizen who lives in Shang Hai saved her. Pao was massaging Pangrum’s ankle so hard that she cussed at him in Thai because she thought he wouldn’t understand her. She got up and gave money for helping her, Pao got mad and was about to say stuff back when he saw a handkerchief fell out from Pangrum’s bag. The handkerchief made him think of “khun noo with a flat face”, a child friend when he was a kid back in Thailand. Ever since “khun noo with a flat face” disappeared from school, Pao always had hopes that she will come back to him but then his hopes died down when he lost his parents and had to come live with his uncle and aunt in Shang Hai. They lived in poverty and Pao wanted to help out his uncle and aunt so he taught Muay Thai to the people here since he knew how to box anyways.

Back at the hotel where Khun Yai was staying at became chaos when he found out Pangrum went missing. He told everyone to go out to look for her. Rabieb was concern about her but not Sajee. She wanted Pangrum to die and vanish away from her life if possible. But when Pangrum returned back to the hotel, instead of punishing her, Khun Yai hired a tour guide to guide her around town the following day because he knew she was lonely, that’s why she left in the first place. Rabieb was mad at her because she was so worried. Pangrum felt bad for making everyone worry and she became even more sad when she found out her favorite handkerchief went missing. Rabieb didn’t understand why she would feel sad over a plain handkerchief.

The next day Thanope took Pao, the tour guide, to meet with Khun Yai and when he met Pangrum again, they were both shock. They wouldn’t think they would meet again after yesterday. Pao introduce himself and told everyone he’s Thai, making Pangrum feel embarrass because she said bad words to him the day before. Khun Yai paid Pao the money and told Pao to take care of Pangrum really good because she is his woman. The words struck Pao’s heart because he doesn’t know how to handle his feelings for Pangrum. So when he took Pangrum out, he did nothing. Pangrum was mad that her tour guide didn’t care of her so when they went back to the hotel, Pangrum told on Pao to Khun Yai to fire him and find her another tour guide. At the same time, a drunk man came and harass Pangrum, Pao protected her in an instant, faster than a bodyguard. Khun Yai was satisfied with Pao’s action so he knew he was the right person to take care of Pangrum. Pangrum on the other hand was mad at Khun Yai that she didn’t even want to talk to him.

The next day Pao came to pick up Pangrum and Rabieb like usual and coincidently they met Pao’s uncle and aunt and knew then that they were a far away relative of Rabieb. Everyone was happy with the meal they had and Rabieb ate so much that she couldn’t move so Pangrum took this opportunity to go away once again but Pao found her Pangrum tried to run away again but she hurt her ankle. Pao took care of her and the way he was taking care of her made him so familiar to her. She tried asking him who he was but Rabieb’s phone call interrupted her. Rabieb told Pao to take Pangrum back at the hotel fast because Khun Yai had another meeting in another country to go too. Sajee told Khun Yai to leave Pangrum here so she could spent time with Khun Yai alone. When Pangrum knew about it, she was furious with him so she took Pao to go have some drink. Pao tried stopping her but Pangrum wouldn’t listen. She got drunk so Pao carried her back to their place. Rabieb misunderstood and thought Pao was the one trying to get Pangrum drunk so she slapped him and told him not to be her tour guide anymore. Pao was sad and took out the handkerchief, missing his “khun noo with a flat face”. Pangrum was also thinking about Pao.

The next morning, Pangrum tried calling Pao even though Rabieb told her not to but she couldn’t stop her because her stomach was hurting. Pangrum hired a nurse to take care of Rabieb before she headed out with Pao. They went touring, having a good time of their life but happiness always comes to an end. Pangrum had to go back to Thailand the next day and she couldn’t say good-bye to Pao either. Pao thought in this life, he wasn’t going to see her ever again.

Back in Thailand, Rabobe [Tom Chuancheun], who was the chauffer for Khun Yai and Sajee, got into a car accident but luckily no one wasn’t badly hurt. Ganda then called Withit [X Piya] to become the new chauffer but Khun Yai didn’t like that so Rabieb wanted Pao instead and so did Khun Yai. Pao got ready to come to Thailand but Ahmui [Kambum Pimnipa], daughter of a mafia who likes Pao didn’t like that idea. She threw tantrums, Pao’s uncle and aunt tried to stop her but she wouldn’t. She will do anything to come to Thailand with Pao so Rabieb had no choice but to accept Ahmui as another servant in the house.

But no one knew that once Pao came to Thailand, it will cause so many problems but Khun Yai always love and adore him loyalty for him. When Khun Yai found out that his little sister likes Pao, he was okay with it and supported her. This made Thanope unhappy because he always loved Khun Ying. He even went on Sajee’s team so they can get rid of Pangrum and Pao. Sajee convinced Khun Yai to allow Pangrum to do a commercial in a different province and to take Pao to accompany her. The two had fun while getting to know each other more. When Pangrum fell off the boat, Pao went and help her but later on the two got stuck on an island together. The atmosphere was good and one night the two lost it to each other. Khun Yai was stressed that Pangrum went missing so he told his people to go out and look for her. When they found her, Khun Yai ran up to Pangrum and gave her a hug. Everyone was shock by his reaction.

No matter how hard Pao tries to keep his feelings for Pangrum inside, he couldn’t get away with it especially having Ahmui messing with him and always getting him into trouble. Sajee convinced Ahmui to be one of her people and to make matters worse, Chanont also likes Pangrum and asked Khun Yai if she could be a part of the share in the company. Khun Ying and Khun Lek starts to become suspicious of Pao and Pangrum’s relationship. Both of them felt betrayal and hurt…….How will the love triangle between Pangrum, Pao, and Khun Yai be? What will Khun Yai do when he finds out the man in Pangrum’s heart isn’t him after all? Stay tune for Tur Gup Kao Lae Ruk Kong Rao [You and Him and Our Love] through channel 7.