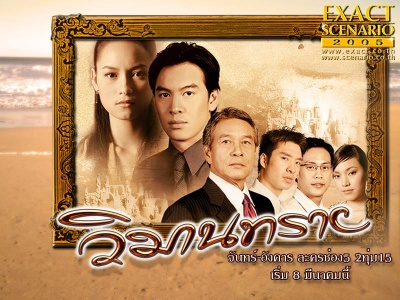 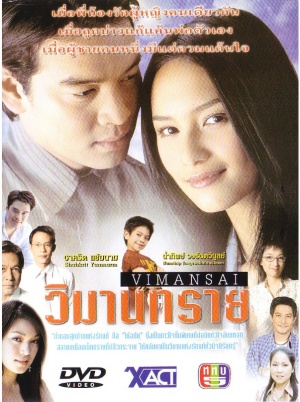 Panin Nirapai (Chakrit Yam-nam), young engineer and oldest son of a well known real estate company, went to the site in Rayong province and was on his way back. During the way, he came across with two robbers trying to break the window and get into his car. Panin chased the robbers down the beach and broke into a fight with them. They accidentally ruin a sand castle made by Arissara Chunhakorn (Namthip Chongratchatawiboon), a beautiful painter. Arrissara was angry with them at first but when she found out what was going on, she tried to help Panin who was attacked and passed out. When Panin woke up again and they had a chance to talk, Arissara misunderstood that Panin was merely a local foreman. Panin was impressed by her generousity and attitude. When both came back to Bangkok, one day when Arissara was waiting for a bus at the bus stop, she was bothered by some bully but Panin came across and helped her in time. Panin offered to drive her home and Arissara accidentally forgot her hand phone in his car of of haste. Both planned to see each other again the next day, Panin was very happy to see her. Alas, unfortunate stuck as Panin found out only on that day that Arissara was a woman who his brother, Pinyo Nirapai (Panomkorn Tangtatsawat), also. As for Arissara, she was very angry with him as she felt that he lied to her when she found out that Panin was not only a foreman but a son of Puchong Nirapai (Nirutt Sirichanya), a famous and rich real-estate company owner and the older brother of Pinyo, her close friend, too.

Panin was very sad that everything turned out like this. He tried to hide his feeling because he thought that his brother’s happiness was more important. When Pinyo decided to propose to Arissara but was rejected because she only thought of him as friend. Pinyo was very sad and buried himself in booze. Puchong was disappointed with his son and had bad attitude to Arissara. Panin went to see Arissara to talk about his brother but when he arrived at her place, he saw that Arissara was with Nont (Charnchai Warawittaya), a recent heart broken painter and friend to Arissara. Nont came to see Arissara to tell her that he got a scholarship aboard and say good bye. Panin got jealous and misunderstood that Arissara rejected Pinyo because she had Nont as her lover. Panin condemned Arissara for being a loose woman. They had a quarrel and Panin unintentionally raped her. Panin was deeply guilty for what he did so he offered to take responsible for everything but Arissara threw out his offer and told him to get out of her life.

After that, Arissara dicided to take a teaching job in Supanburi with her friend, Linchong (Ashita Sigkamana). After two months, Arissara found out that she was pregnant with Panin’s baby but Linchong thought that Pinyo was a fater. So, she went to see Pinyo and told him to responsible for what he did. Pinyo said that it was not his baby but he was willing to take care of Arissara and her baby. That day, Pinyo decided to propose to Arissara again. She accepted with a condition that she would not be living in Nirapai’s house. When Puchong found out, he totally argued with Pinyo decided to marry a woman who was nobody like Arissara. He cut Pinyo out of the family. Panin buried himself in booze to forget the pain. One day he had met Sirirassami (Pitchanart Sakhakorn), a well know jet set who liked to toy with a man’s heart. She tried seducing Panin but got no reaction from him. Sirirassami felt embarrassed and determined to win over Panin. Sirirassami began her plan to win Panin’s heart with assistance form Puchong, since he thought that Sirirassmi was worth for Nirapai’s heir.

Pinyo and Arissara moved to Chonburi. Pinyo got a job as an accountant and work hardly to support his family. Linchong came to stay with them to help take care of Arissara around the end of her pregnancy period. Linchong demanded the truth from Arissara and was told that Panin was actually the father of her baby. Pinyo overhearded their conversation and was totally heartbroken. He got himself drunk and drove back to Bangkok but had an accident and died. Puchong misunderstood that Arissara was the caused of Pinyo’s death and hated her even more.Panin went to see Arissara to inform her about Pinyo’s death. Arissara was shocked and passed out. Panin hurried sent her to hospital where she gave birth to Panin’s son and named him Pete or Pinmas (Nachawanont Haotawanich). Puchong heard that Arissara had a son and wanted his nephew to live with him but wanted to get rid of Arissara. He planned his plot with Sirirassmi by offering one million baht to Arissara for giving him Pete but she declined. During that time, the doctor told Arissara that Pete had a problem with heart and had to take operation as soon as possible. The operation was very expensive so Puchong offered to responsible for all expenses and promised to take care of Pete. In return, Puchong asked Arissara to vanish from Pete’s life. Arissara, having no other alternative, resort to accept Puchong’s offer but refused to take money from Puchong. After Arissara left, Puchong showed the contract he ordered Arissara to sign to Panin and flamed her for wanting money to start a new family with her new lover. Panin fell into the trap and got mad at her. After taking the operation, Panin took Pete to the States for further medication. Meanwhile, Arissara applied for a job in a nursery hoping to see her son one day.

Five years passed, when Panin took Pete to apply in a school, the boy got lost and was almost hit by a car but Arissara saved him in time and recognized immediately that the boy was her son. She held Pete with longing when Pete also felt the warmness he never had from mother in her embraces. Panin found them and was shocked. He hurried took Pete back home while Arissara could only watch with remorse. After that, Arissara tried to beg Panin to see her son but was refused. As for Panin, meeting with Arissara several times reminded him that he could never erase her from his heart. With Pete started education slower than other kid, Panin had to find a special tutor for him but no one was able to stand him. Panin was worried and finally decided to hire Arissara to teach Pete under a condition that she must moved to stay in Nirapai house and never tell anyone that she was Pete’s mother. Arissara came to stay in Nirapai as a disguise of Patcha. Pete was very happy and his study began to develop. For Panin, being close to Arissara brought back his old feelings for her. At the same time, Pokhai (Nithichai Yot-Amornsoonthogn), Puchong’s son with a maid Srinuan (Wassana Sitdhivej) who was always jealous at Panin took the chance when Puchong was absent from the company to take away the money.

For Nont, his relationship with Linchong was developing steadily and became closed friend. One day when Nont came to see Linchong at her room, he overheard that Arissara was staying at Nirapai’s house. Nont was angry that Linchong had lied to him all the time. He went to see Arissara and had a fight with Panin. From that incident, Pokhai began to curious about the relationship between Panin and Patcha. Nont had a quarrel with someone but had no money to pay for the damage expenses. Linchong paid for him and used this chance to tell him to correct his bad habit. Nont and Linchong began to feel good to each other. However, Linchong, who always know her heart, was quite upset that Nont was always thought about Arissara. Sirirassami was furious to see that Panin was getting closed with Patcha. She hired Pokhai to make a dig in Patcha’s history. Pokhai was already prying on their relationship so he agreed to take the job. At last, Pokhai discovered that Patcha was actually Arissara Chunhakorn, the mother of Pete. Sirirassami called to tell Puchong who was aboard at the moment. She told him to come back to Thailand to fire Arissara from the company. Panin was furious to know that Sirirassami had a hand on his relationship with Arissara. He had an argument with Sirirassami.

Panin took Arissara to live happily at a small house in the orchard. Sirirassami still wanted to win over Panin so she planned with Pokhai to buy the company shares and was succeeded in becoming the main shareholder. During this, Pokhai raped Sirirassmi and took a photo for blackmailing. Panin intended to forgive Arissara and propose to her while Arissara was determined to tell him the truth that Pete was actually his son. However when Panin came back, he received the bad news that Sirirassami had became the main shareholder and planned to take over the company. Puchong had to admit to the hospital after hearing the news, he begged Panin to marry Sirirassami as he could not stand to see the company he built up own by others. What would Panin do when his “castle” was not turn out the way his expected? Would he marry Sirirassami and leave Arissara, the woman who had always been inside his heart for his father?