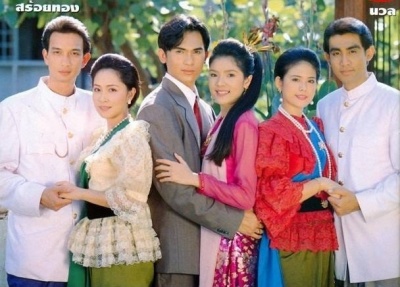 This is a sequel to Sailohit.

Paworn (Dodo) falls for a merchant's daughter, Nuan (Tik). Nuan's father refuses to give her to him to marry, claiming that no man can take care of his daughter as good as him and Paworn can only have her if he can find gold weighted as much as Nuan. Paworn decides to take Nuan away (with his parent's permission and with the help of Nuan's mother) to live with him as he goes to work in Songkhla. After Nuan gives birth to a daughter, her father comes to tell her to come back to him but she refuses. She then vows to make enough money to surpass or equal to the money her father can provide for her and she decides to go into the business of making desserts. She gives birth to another daughter, Soithong and she works herself to the point of illness. She then dies and Paworn sends his children to live with his parents after his grandmother forces him to have another wife.

Soithong is a rebel and she grows up to be an independent thinker and rebellious for a girl of that time period. She catches the eye of Chawan (Nuti) who falls in love with her at first sight when he sees her hanging off of a tree. Chawan’s mother wants to find him a wife and coincidentally from Soi’s household. At first Soi’s sister Puang is chosen but Poung is determined to never marry so Soi’s grandmother wants her to be engaged to Chawan. Chawan finds out that Soi is the girl he is supposed to meet and immediately agrees to be engaged to her. Soi hates the fact that she has to be forced to do things and yearns for the day that women choose their own husbands. She vows to never love Chawan. Soi requests that marriage be put off until she finishes school and Chawan, a modern man who has studied in Scotland agrees that a woman should be highly educated and backs up her request. They get married and Chawan is filled with affection for Soi and always wants to show it through hugging and kissing her. Soi is annoyed and is always pushing him away, telling him that it isn’t necessary for him to be always so and telling her that he misses her. Chawan wants Soi to tell him that she loves him but she tells him that some things cannot be said because it doesn’t match with how they feel. They spend a lot of their marriage having these types of arguments. Chawan decides that he must get her jealous so he spreads a rumour that he is having an affair. Soi is upset but doesn’t show it to Chawan who then gets angry that she is unresponsive. Soi adopts an orphan and spends all her time with the baby which makes Chawan jealous. Chawan wants her to be a traditional wife who buttons his shirts every morning and helps him put on his shoes but Soi confronts him that that is the job of a slave, not a wife. So’s great-grandmother and grandfather die on the same day and Chawan tries to comfort her. She hugs him and almost gives into his comforting presence but remembers that he has a mistress so she keeps some space with him. He and her go back to her house for the funeral and they argue again as she refuses to go sleep at their own house. Poung and her grandmother force Soi to go to her husband and he manages to get Soi to soften with him a little as he pulls her to his chest and recites her favourite poem to her. They get into another argument as Soi refuses to go back with Chawan after the funeral and Chawan heads home first. Chawan has written a book based on Soi and Poung reads it and knows that it is about her sister. She gets Soi to read it and the end of the book says that the narrator loves only one person. Soi finds out that she is pregnant and rushes to go back to Chawan. It is all a little too late as Chawan has fallen deathly ill after spending tireless nights writing the book about Soi. Soi finally tells him that she loves him and Chawan is saddened telling her that she loves everyone in the world from her family to street vendors to orphans but never him. Soi cries and he dies in her arms saying she is his love.

Soi has a son, Chawala (Bee), a soldier. From Sai Lohit there are the brothers, Thep and Krai. Thep has been in the dreams of Soi and Chawala, wanting them to find his sword and bring it back together with Krai’s sword. Thep leads them to Myanmar and Chawala dreams of a dancing girl, knowing that she is the key to the sword. He requests for a traditional dancer and Mankaew (Ning), performs for him. He is shocked and wants to approach her in the middle of his dance but his mother pulls him away due to the inappropriateness. He manages to tell her about the sword and Thep and she takes him to the sword in her house. Chawala then brings in Krai’s sword and puts them together. He tells Mankaew’s father that he loves her but her father refuses to let his daughter marry a Thai man. Mankaew hugs Chawala, wanting to run away with him but her father sends men to try to beat up Chawala, so Chawala leaves Mankaew. Chawala asks his mother what her obstacle was regarding her love life and she thinks back to Chawan and the time she hurt his feelings badly after telling him his words of love and missing her bores her, and Soi tells him that she herself was the obstacle to her own love. Mankaew's aunt goes to talk some sense into her father and he finally loosens up. As Mankaew is giving a tour in Myanmar, she sees Chawala and they hold hands. They then go back to the ruins left by the war Thep and Krai were in. The END. By Cupid Candy