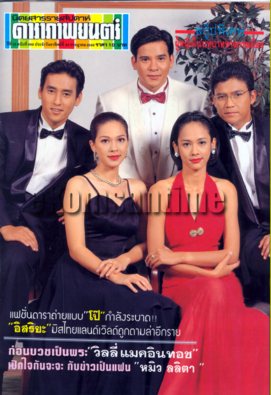 This summary is written by thaifanuticgalaxy

Kathaleeya is the princess of the kingdom of See-Karin. Due to some political and harm issue in her country her father wanted her to he safe so that she would not have to see everything going on, so he sent her to a different country. Which was Thailand after she finished school in Paris. She was a smart and independent woman. Her father didn’t want anyone to know that she was in Thailand so they disguised her identity. Only three people including her caretaker; Pin knew who she was. Tang was hired to be her body guard but all he knew of her was that she was a rich heiress of her father’s rich in Chiang Mai and her relatives was after her for her fortunes. There were really people after her in Thailand cause the guy that wanted to rebel from her father ordered this guy to kill her. On the day that she arrived he was late cause he got into a car accident and they got off on the wrong foot cause she said some not so nice things to him and he returned her comments. So they really didn’t like each other at first. When ever she wanted to go out he would say no cause he had something to do. She was a person who wanted things done her way and wouldn’t take no for an answer. She always let him know who is boss and he was the one that was working for her and not the other way around. They were really mean to one another cause they both believed that they were right. He almost got fired on many occasions but she always realized that she was wrong and apologized. They started to get close when they went out together and they showed her around the city. Pin always reminded her that she could not fall in love with him cause she was not the same as he was. He at this point had her in his heart. His ex-girlfriend also showed up and messed things up between them. she was seeing the guy that was sent to kill Kathaleeya. She knew and she wanted to get close to Tang again so that she can get closer to Kathaleeya and get rid of her. They almost succeed on many occasions but he was there to save her. It was almost time for her to leave and she went over to his apartment and she told him what she felt and he showed her how he felt. At this time in See-Karin the people that wanted to rebel seized power under the command of the King’s younger brother who wanted to take over. Kathaleeya was watching the news and she heard and was shocked. She rushed home and this was when Tang was informed about her true identity and he was upset that he was lied to this whole time. He quit and went off but returned to help her when she was supposed to be sent back to See-Karin. They went to stay with his parents but he never forgave her. One night she decided to go out and he went to save her and the See-Karin cops came too and Tang was shot. This is where she learns that he loves her through letters that he wrote home. When he woke up he took her out. That night the See-Karin people found out where she was staying and killed Pin her caretaker and kidnapped her. They locked her up in a hotel room. Tang was devastated and he finally realized that he gave her a ring that had a tracer in it and so he and his friend Pon sneaked into See-Karin to find her. They were taken to her father. They went to look for her everyday. They finally found a trace but it led a prostitute place. The man that was guarding Kathaleeya took the ring from her. They followed him and his ex-girlfriend knew that he was there and tried to stop him but she was unsuccessful. Tang also followed her and finally found out where Kathaleeya was and went to rescue her. They ran but were caught once again. Tang was tortured into telling them where her father was but he lied. At this time the bad guy that was sent to kill Kathaleeya forced the King’s younger brother to sign all power to him and he no longer needed Tang’s ex so he gave her to this guy and he raped and abused her. She was fed up and helped Tang and Kathaleeya escape. She died in the process and so did the bad guys. Kathaleeya was reunited with her father and Tang and Kathaleeya knew that they could no longer be together. They both were sad. He was going to go back home but when his dying friend Pon gave him a lecture he realized that he should do what he wanted and went to her. They spent the night together and after a heart filled speech to one another she went home. After the knighting ceremony he also went home with only the sunset as a memory of his love and her love for each other.