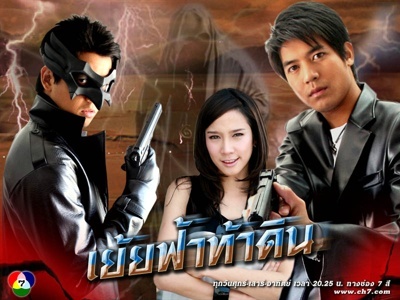 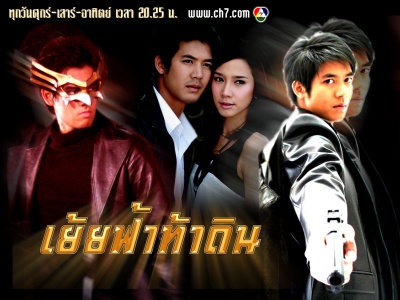 "When a human requested for immortality from the God of Death and the wish was granted however he never knew how difficult his compensation was. The only thing that he won't let go was his goodness but can he preserve his goodness for eternity while the sole of doctrine is flourishing strongly?"

Gawin, an enthusiastic cops from Crime Suspension Division is chasing after The Eagle Gang, a transnational drug dealer gang and is seriously injured but is able to kill an important member of the gang making him became a target for the Eagle Gang. This did not frighten him because he had the determination to completely eliminate the gang to revenge for his parents that were ruthlessly murdered when he was a teenager. Due to the fact that his father was an intelligent cop from the Crime Suspension Division, Gawin was able to miraculously survived. On that day, he has a well kept secret of being able to see a dark shadow retreiving his father's spirit and after that day, he was able to keep seeing that dark shadow every time someone died and he always tell himself he's only seeing things.

Ticha, an orphanage girl being guardian by Auntie Niam, a shop owner across from the Crime Suspension Division. She has a sickly brother name Natee. Natee has always dream of becoming a cop and adhere Gawin as a hero while Ticha secretly love Gawin but won't express her feeling because she knows that he already has a girlfriend name Duang Jai, a ballet teacher. Gawin too, also think of Ticha as his brother because she's fearless, bold and open like a guy.

When Gawin recuperated from his injured and starting to investigate who the gang leader of Eagle Gang is, he was being target again. This time is trap a bomb to his automobile. Gawin is suspicious of a dark shadow near his car but it is that Natee want to play hide and seek with Gawin went in the car. Gawin went to seize Natee out of the car and both of them were attacked by the bomb. Before loosing conciousness, Gawin saw a dark shadow came to him and took his spirit to the boundary of death. Gawin just realized that the dark shadow all along is the God of Death and his life span is at end but Gawin is not willing to cross the boundary of death. The God of Death can't stop Gawin's power of mind to cross him over so Gawin's spirit went back to his body.

Natee was being taken to the hospital by Ticha and is suffocating and loose consciousness. The doctors analzyed Natee's blood abnormality that he may have leukemia. Ticha nearly fall yet stand because she loss Gawin, the man she love. While Ticha is hopeless, Gawin suddenly woke up shocking everyone at the hospital. Gawin told the doctor to stitch and clean his wound. He then went to visit Natee whom is doing fine when he saw Gawin. Gawin then went to the Police Department to report, again, shocking the Director and his fellow police friends especially to the Commander in Chief, Wanlop, a corrupted mole for the drug dealer. Wanlop has a deep relationship with Pimpaa who is the right hand of Gawin. Pimpaa was suspicious of Wanlop's attitude and investigate Wanlop and know that Wanlop contact The Eagle Gang. Pimpaa decided to tell Gawin. So Gawin follow Wanlop hoping that Wanlop will lead him to the gang leader but was trapped instead. Gawin was tied and dumped into the river. Once again, his spirit left his body but insisted on not going and his power won over the God of Death again. His spirit return to his body. He untied himself and use a long tail boat to chase after the bad guy. He caught up and they had a hand to hand combat. When the police got there, Gawin already seize the bad guy. Everybody praises him as the new hero.

Gawin is assign to work on a big and risky case and other case along with Pimpaa and Sakda, a junior cop that always. Gawin is gaining confidence in in his power that challenges death but his girlfriend Duang Jai is afraid that Gawin will be in dangerous. She has asked him to quit this job but he promised her he won't die for her. To make sure of his future, he engaged her and tried to take her to places especially to see Natee which make Ticha hurt.

During the time when they were trying to stop the drug dealing Gawin was capture and bury alive. His spirit left his body and this time he requested for immortality to eliminate all the bad human. The Death of God considered it and said that as long as human exist, bad people will exist. Gawin disgreed with the Death of God. The Death of God grant his wish. After this the Death of God said, even when you want to die you won't die.

Rumors of Gawin's recovering from the death spread around making people wanting to meet him especially to see the charm Gawin has. One of the people that came is holy teacher who wants to study Gawin's power and the life after death. Gawin rejected him. While he was proud of his victory over the God of Death, his girlfriend Duang Jai was murdered. After that one by one, people closed to him was being threaten. Gawin don't want anything to do with anybody because he don't want to cause them anymore trouble. Ticha seeing how sad Gawin is following him around but he always chase her away. Natee's condition is getting worse by the minute, they're in financial need. Ticha applied to work at a female service in one of a club and coincidentally the owner of the shop is a big business exchange that Gawin has to meet. Gawin sees Ticha and scolded her that why would she sold her pride in exchange of money? Ticha told him, for her brother, she is willing to do anything. Gawin then visited Natee and Natee's condition got better and Gawin promised he'll visit Natee often. Natee is full of happiness.

But Gawin has to break his promise because he was being follow and threaten. Ticha is mad that he broke his promise. Ticha has to find a job and was deceived to go do drug dealing. Ticha met with Gawin again and Gawin ask her to become a mole for him. She said she was going to quit because she don't want to be involved with this drug dealer gang but agreed to his request anyway. But Ticha was caught first by Maykha the gang leader. To exchange for Ticha, Maykha request that Gawin should bring him the black list name from the Crime Suspension Division. Gawin agreed to this deal because he love Ticha already. Before they were going to exchange, Ticha jumped down the river to end her life because she don't want him to betray his country. Ticha entrust Natee to Gawin's care. Gawin attacked Mayka's follower and shoot at Mayka but to his surprise the bullet just go through his body. Gawin finally knew that Mayka is just like him, has ask for immortality from the God of Death. Maykha was just like Gawin, a police who was threaten and being chase by the gang. After asking for immortality, Maykha has only encounter sadness, losing the one he love before his eyes, being betray and force to the point that he violate righteousness. When he know that Gawin is one of him, he tell Gawin to contact the God of Death and want to end his life or else Gawin will loss his the person he love. Gawin go to the hospital to see Natee but Natee is disappear.

Gawin strive to look for the God of Death everywhere, where he thought he'll find the God of Death but he didn't. He then ask the holy teacher to help him. The teacher teach him how to move his spirit out and go to the boundary of death. The teacher also tell him if he don't make it in time, he will die and his body will roam eternity. Gawin met with the Death of God and ask him how they can die to preserve the goodness in the world. The God of Death surrender to Gawin's heart. Gawin return to his body in time when someone is trying to attack him.

Gawin met with Maykha and tell Maykha that the Death of God told him the method. The method was that both of them have to battle the power of mind. Whoever lose will become immortality.

Gawin and Maykha, who will become immortality.

The one that live, will live Challenging Heaven and Earth. How will he live? Credit-SpicyForum