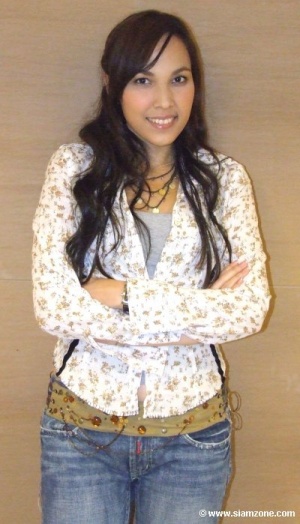 Zita Zalai was born in the United States, raised in Thailand by a Hungarian father and Thai mother. She is the younger of two daughters.

Her first exposure in the music industry was with a trio girl band called JZJ.

Asanee Wasan and Grammy took notice of her eloquent and beautiful voice and she started singing remixes of Asanee Wasan's songs and at their concerts. She then debut her own solo album which gave way to her own initial stardom.

Low record sales, lack of promotions, and mp3 piracy hurt her status to rise above others, but she continues to struggle to make it big.

She has worked in collaboration with several artists and can be seen with Clash in their VCD Clash Smooth as well.

Grammy Simply Emotions was her latest endeavor at the time this wiki was created. She is scheduled to play in a concert in Thailand in November for Asanee Wasan. Please support her and purchase a ticket if you are in Thailand.