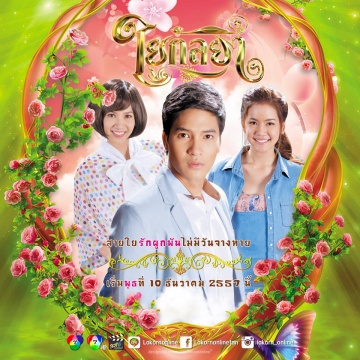 Hormnam is an intern at a lakorn set that went to film at a famous actress's house. There, she meets the spirit of Putkanlaya, who was once a rising actress but she committed suicide thereby ending her short rise to fame.

Putkanlaya asks Hormnam to be the middle person for her to be able to communicate with her husband and son, Sawat. Hormnam agrees because she suddenly has to take on the task of being a second nang'ek in the lakorn, but her acting is beyond terrible. Putkanlaya will help Nomnam out by possessing her body during shooting.

Sawat is a serious dentist who doesn't like to smile. He doesn't like the press and doesn't trust Hormnam who always tries to make friend with him. The bright, playful, and cute Nomnam feels like she's talking with a vampire every time she goes near Sawat. He doesn't talk to her and always make a calm stoned face. Hormnam uses various methods to get close to the stoned face dentist. She brings a lollipop to Sawat every time she comes to his clinic in an effort to get him to smile.

While being the middle person for Putkanlaya, the hidden past and secrets, and the truth behind Putkanlaya's death slowly come back to harm Hormnam. She must deals with various problems including falling for Sawat and his jealous mother trying to permanently possess her body. Can Sawat save Hornnam from his mother spirit? We'll have to see.