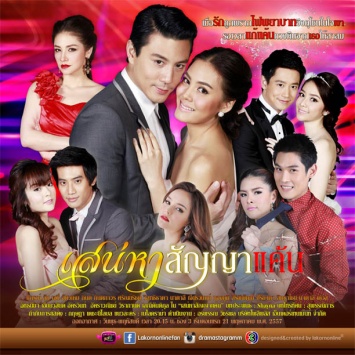 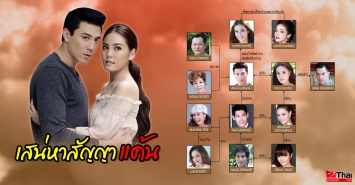 This is a slap/kiss lakorn with love and revenge. The show starts off with Kin (played by Dome), the President of KTK Corporation marrying his long time girlfriend of 7 years. On their wedding night, the bride, Ganok left their bridal home to go retrieve a wedding present that she had forgotten at her previous resident for her newly wedded husband. Tawan (played by Janie) had just left the airport after finding out that her fiancé had been dating another woman for two years and is now breaking off their engagement. Moreover, they are expecting their first child. Tawan, hurt and heart-broken, walked home in the rain and while crossing the street was hit by a car driven by Ganok. Tawan was hospitalized. Ganok was later pronounced death. Kin was devastated that he had just lost the love of his life, newly married not even over night. Kin demanded to know who that person was that caused his wife's car accident. He later went to Tawan's hospital room and read the name on her ID tag. That name is now forever embedded in his mind and promised Ganok that he will seek revenge for her with the upmost satisfaction. And the story continues on....