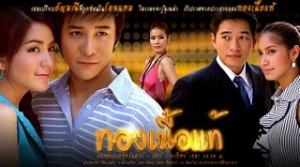 English title: “Virtuous Tong” It was kinda hard to translate the title because it’s a play on words. Tong Neur Tae means real gold from the elements. Tong is also the name of the n’ek and means gold. I wasn’t sure if I should translate Tong or leave it as is. Tong Neur Tae represents n’ek, she is the precious gold–the real thing. Gold is a substance that can not be tarnish by the elements. It can be bury by rubble for centuries and when found, you can wash the dirt away. The same concept also implies to virtuous people. Good people can be buried/stained by false rumors and negative social elements but because they remain virtuous their reputation will be vindicated and cleared.

Tong Neur-Tae can be best describe as a romance/ misunderstanding lakorn. N’ek is virtuous and good while P’ek believes otherwise because she is being stained by false rumors and false perception by n’rai (the girl villian). You can say it’s a typical lakorn plot line.

Nuantong (Benz) is a good person with a sorrowful fate. As a young girl, Nauntong’s mother was killed in an auto accident leaving her all alone in the world. She was later adopted by a couple: Oora and Seepungon. While living with Oora & Seepungon she is introduced to Nopnai (Kong), a good guy who Nuantong falls in love with because he gives her emotional supports in her time of need.

Besides meeting good people like Nopnai, Nauntong is also introduced to the people who will bring her much sorrow. Ponsawan (Phimonrat) and Panyaa (Pichetachai) are a brother/sister duo who will destroy Nuantong’s reputation and pretty much make her life a living hell. Ponsawan is a woman who is interested in Nopnai, so she paid her younger brother Panyaa to make it seem like Nuantong and Panyaa had something going on. Ponsawan feeds Nopnai lies about Nuantong and he is crushed because he secretly likes Nuantong.

Nuantong starts ignoring Panyaa for ruining her relationship with Nopani. Panyaa who likes Nuantong is deeply hurt. He goes off and rapes Nong Nu (Ploy) an acquaintances of everyone.

Nong Nu becomes pregnant and attempts suicide because she is ashamed for being raped and getting pregnant. Nopnai stops her in time and asked who the father of her child is. She refuses to tell him. Being that he’s a good guy, Nopnai offers to be the father of the child to save her reputation. They get marry.

Nuantong continues on with her life until Oora and Seepungon fall into debt. Oora falls gravely ill and the couple can’t pay off their debt. To make matters worst, they got their loan from an evil loan shark named Narong. Nuantong quits school to help out her adopted parents and she also decides to give herself to Narong to pay off the debt.

On the day of Narong and Nuantong loan agreement signing, Narong has a major accident that left him paralyzed. Nuantong comes into Narong’s home and starts caring for him. He starts softening up and falls in love with Nuantong because of her virtuous nature.

During this time, Nong Nu has a miscarriage. Nopnai relinquishes his responsibilities for her and looks for Nuantong to rekindle their relationship. When he finds Nuantong living with Narong, Nopnai again misunderstands Nuantong.