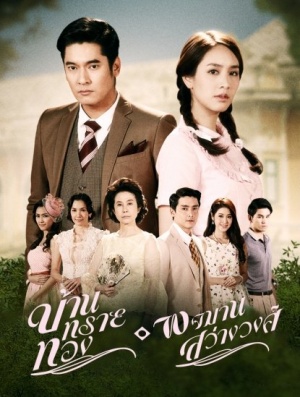 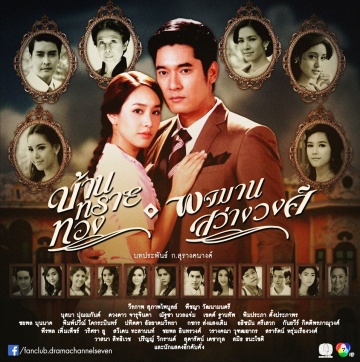 Potjaman (Min Pecheya) is sent to live in Ban Sai Tong (Golden Sand House) upon her deceased father's wishes. There she instantly feels unwelcomed by it's residence, her second cousins the Sawangwongs. Her aunt, Mom Panarai and her youngest daughter Ying Lek hates Potj, while the eldest daughter Ying Yai is cold to her. However, she immediately bonds with the youngest son Chai Noi, who is crippled and his nanny(Nom Tip). There at the Ban Sai Tong, Potj is not looked upon as a relative and is ordered to work like a servant. She is sad and homesick, but bears the treatment because it is her father's wishes that she finishes her education.

One day while wondering around the grounds of Ban Sai Tong, Potj is frightened by an elderly servant, whom she thinks is a ghost. While running for her life, she trips and is caught by Chai Klang (Vee Veeraparb). His nick name "Chai Klang" means middle man/guy in Thai referring to the fact that he is the middle brother. Although Chai Klang is a stern person who doesn't show much emotions, he immediately empathizes for Potj and fights to get her the respect worthy of a relative. He makes himself Potj's guardian and seeks to teach her qualities of perseverance and patience. Though it's not in the will, he also knows that Ban Sai Tong belongs to Potj's family after his grandfather dies.

Because of the care and attention Chai Klang gives Potj, his mom and Ying Lek grow to hate Potj even more. Naturally their guardian/child and brother/sister relationship grows into love. They get married, but Potj is not certain that Chai Klang married her for love because he never told her he loves her. So how will Potj and Chai Klang overcome their obstacle of having his mom and sister accept Potj as his wife and did Chai Klang marry Potj because of love or was it because of Ban Sai Tong? Watch and find out! (credit: Looksy @ asianfuse)

Being a big fan of this lakorn and a big fan of both Chai Klang and Potj as characters, I've seen all three versions currently available. This version is not as long as the 1987 Saranyu & Morudee version, which older fans of Ban Sai Tong hold close to their hearts (myself included), I can honestly say that this version is even better than the 1987 version. Aside from about 3 three episodes in the middle of the lakorn, the overall pacing is wonderful. DaraVDO (who also produced the 1987 version) did a wonderful job on the script. Most importantly, this version stayed true to the integrity of the characters and their love for one another, which I felt lacked in the 2000 version with Num & Joy (which took a lot of liberties with some key parts of the storyline).

My recommendation, if you've never seen Ban Sai Tong, then this version is a great choice. Vee and Min are wonderful in these roles. Then if you enjoyed the storyline and the characters and have the time, then it's worthwhile to also see the 1987 version to compare and get a different take of the lakorn (though I admit that the 1987 version got a little draggy, especially with the servant scenes in the second half of the lakorn). As for those that have already seen and fell in love with previous versions, I still highly recommend this version because it does have it's own merits and this is coming from someone who fell in love with the 1987 version. Both Chai Klang and Potj's characters are presented in a slightly updated, fresher interpretation compared to the 1987 version, but still in keeping with the integrity of the characters as opposed to the 2000 version. Watch it and fall in love with Chai Klang and Potj all over again. (credit: Looksy @ asianfuse)

This lakorn is considered a classic lakorn and is based on 2 novels, "Ban Sai Tong" and "Potjaman Sawangwong".